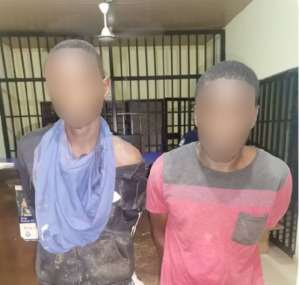 The police in Accra at dawn on Sunday, December 5, 2021 arrested two men, Samuel Agyei and Sumaila Mahama on suspicion of involvement in a robbery.

The two suspects were arrested following a distress call received by the police patrol team that some unknown men had invaded a neighbourhood at CPL estate, East Legon Hills.

The police rushed to the scene and with support from some of the residents managed to arrest the two suspects.

On the spot search conducted on the men led to the retrieval of a 75-inch curved television set, an iPhone 12 pro max, one techno smartphone and a revolver pistol with four rounds of ammunition.

The team also found KIA morning saloon car which the suspects had parked at the roadside to convey the booty.

The suspects will be arraigned in due course.