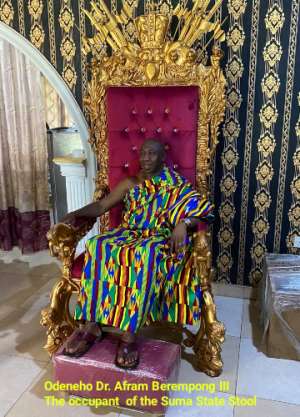 Scores of years ago, a hapless orphan of Ashanti blood preyed on the inordinate hospitality of the Goka people and in the end infected them with a highly transmissible killer skin disease in his youthful age.

The Oracle of the Goka Tamom deity decreed that all infected and noninfected children should take a sacred bath in the River Goka to wash themselves clean and immuned respectively from this skin destroying pandemic.

Only children caught the infection from the beginning.

Indeed, the River Goka as has been relied on for such emergencies in disease outbreaks fulfilled its side of the bargain according to the respect the people bestowed to it.

A dozen sheep was sacrificed for this supplication exercise to the river by the Sumankwaahene (the chief deity), with the approval of Gokahene (Chief) who carried the mandate of the Suma State Stool.

All the kids that took the dive had their skins showed for the potency of the River Goka with the urgency it treated their debilitating disease.

Those who were yet not infected too got inoculated by the fine waters of this river god.

Yet, a fortnight after the sacred bath, the disease reemerged fiercely, now registering casualties.

The Tamom deity was consorted again, and it came out that the kids were reinfected by the elderly, who for strong immunity never showed symptoms for the infections.

So this time the urgency of the case had the Paramount Chief of the Suma State himself in attendance to appease the River Goka for another sacred bath that will have all ages dunked in the healing waters of the saviour river.

A dozen cows had their blood spewed for this second sacrifice, and the young and old, male and female, took turns in cleansing themselves uncovered, just that the adults were given their privacy.

Unheard of failure ever associated with the River Goka like this, in another two weeks, now not only kids that were marauded lethally by this novel skin disease that caused itching and heart-wrenching pain, but the grown-ups too tasted its wreckages.

This time the Tamon deity was alarmed, and upon looking through the _Pɛtɛtakra_ (a vulture's feather or crystal ball), the source of the resurgence of the disease was discovered.

It was zeroed to Kwasi Asante. The Oracle revealed that he entered the river covered in animal skin or leather, misusing the privacy granted him.

He never left behind the parents' evil blood that ran through him even in his youthfulness, with Bono upbringing. He hated the Suma State to distraction, and he everyday looked for chance to avenge his Ashanti tribe's defeat.

Once he was mixing concoctions that will be poisonous to those who ingested it, he inadvertently sipped the potion, mistaking it for his daily herbal tea that shared the table with the deadly mixture.

His skin started developing rushes right after the consumption, itchy it was, when scratched fluids came out, and to whom he came in contact contracted it as a communicable skin disease.

And it was through Kwasi Asante that day, as a patient zero, the contagious skin disease spread. To cover up, he wore the leather that looked very like his natural skin under his garments, with which he swum in the Goka River.

The ravaging spread of the disease he never cared, so far as it was killing the Goka people who were the strongest arm behind the Suma State. Such an ingrate Kwasi Asante was - paying good with evil.

Before the Goka people took a third and last sacred wash in the River Goka, the incensed youth forced Kwasi Asante into the river naked, and he came out clean.

This was at the time a truce of armistice had been signed between the Suma State and the Ashantis, vowing never to engage in a battle of supremacy again. So emissaries from the Suma Paramountcy were dispatched to repatriate Kwasi Asante to his motherland.

As it happened in peace time and the Ashanti overlord raced to show his fidelity to the inviolable peace accord between them and the Bono people of the Suma State, Kwasi Asante was taken to the stakes, his head came down on the block, stalked and hanged in front of the Ashanti Manhyia palace to serve as a deterrent to his ilks that will ever dream of using biological weapons to cause anarchy and morbidity.

From that day forward there was no disease outbreak that overwhelmed the healing might of the River Goka.

Though conventional medicine has now rendered the River Goka redundant in modern times, yet its relics are relished by many faithful unwavering adherents. They've marked it for recognition by the United Nations, Educational, Scientific and Cultural Organisation (UNESCO) for protection and pilgrimage.

If you see the Bono people of Goka today lining up in their numbers to receive vaccines against the recent Coronavirus Covid -19 outbreak, it means they're evolving and accommodating to science.

In the cover picture is the current occupant of the Suma State Stool, Odeneho Dr. Afram Berempong III.