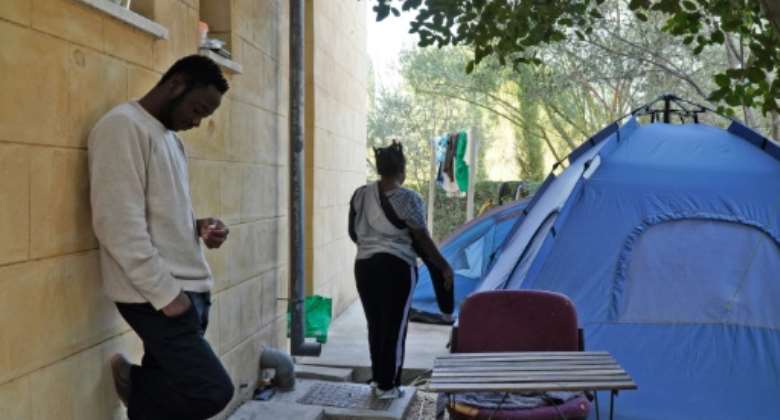 Daniel Ejube (L) and Grace Enjei (R), two Cameroonian nationals, had been stuck in Cyprus's buffer zone since May, living in a tent behind a building. By Roy ISSA (AFP)

Two Cameroonian asylum seekers who had been stuck for months in divided Cyprus's buffer zone are among 50 people who will bring back to Italy with Pope Francis, authorities said Friday.

"Today is my happiest day," said Daniel Ejube, 20, as he left Nicosia's Church of the Holy Cross, where the visiting pope held ecumenical prayer with migrants.

"All thanks to the pope for everything," he said.

Ejube and Grace Enjei, 24, crossed into the buffer zone and approached UN peacekeepers patrolling the area late on May 24.

The peacekeepers took them to Republic of Cyprus authorities at a nearby checkpoint who denied them access to asylum procedures, so they were returned to the buffer zone.

They had been stranded there ever since, living in a cramped tent wedged behind the back of a building, just a short distance from an official crossing point.

Pope Francis meets with migrants at the Church of the Holy Cross near the United Nations buffer zone in Nicosia. By - (VATICAN MEDIA/AFP)

Chilly December winds whipped around the blue tent when AFP visited this week.

Francis's decision to take migrants from Cyprus repeats a gesture he made on the Greek island of Lesbos in 2016 when he returned to the Vatican with three Syrian Muslim families who had fled bombing in their homeland.

The Cypriot interior ministry in a statement thanked the pope for "the significant initiative".

Among the 50 "are the two persons who remained up until today in the Buffer Zone", it said.

Republic of Cyprus denied Ejube and Enjei access to asylum procedures, so they were returned to the buffer zone. By Roy ISSA (AFP)

The Vatican said in a statement that the first 12 migrants, some of whom the pope greeted at the prayer service, would be welcomed thanks to an agreement between the Holy See, Italian and Cypriot authorities, without elaborating.

Ten of the 50 had been in jail for illegal immigration.

Cyprus central prisons governor Anna Aristotelous presented the pope with a gift of a handmade violin made by the prisoners, she said in a statement.

Cyprus has been split since 1974 when Turkish troops invaded and occupied the northern third of the island in response to a coup sponsored by the military junta then ruling Greece -- a division Pope Francis on Thursday called a "terrible laceration".

EU member the Republic of Cyprus has effective control over the southern two-thirds of the island.

Cyprus says it has the highest number of first-time asylum applications in the EU per capita, and accuses Turkey of orchestrating a crisis by allowing irregular migrants to cross from the north.

There is no asylum system in the TRNC.

Enjei and Ejube risked being considered as having entered the north illegally and deported if they crossed back.

People wait to enter Nicosia's Church of the Holy Cross before an ecumenical prayer with the pope. By Iakovos HATZISTAVROU (AFP)

Authorities in the south had expressed concern that allowing them to enter would only encourage others.

Outside the church, dozens of asylum seekers and migrants waited desperately after news had spread of the pope's intention.

Among them were Syrians Bassel Ismail, in his 20s, his wife Feriaz and their baby Maher.

"Life is very hard here, both in the camp and out of the camp... we want to go with those the pope is taking," Feriaz said, referring to a migrant reception centre in Cyprus.

UNHCR, as well as embassies, refugee groups and volunteers had been trying to help the Cameroonian pair with food, blankets and legal assistance over their six-month ordeal.

UNHCR Cyprus representative Katja Saha had previously told AFP that the UN refugee agency was "extremely concerned... that there is no longer access to asylum procedures across the Green Line".

Cypriot President Nicos Anastasiades on Thursday expressed his gratitude to the pontiff for taking the group, though the Vatican had not yet confirmed the move.