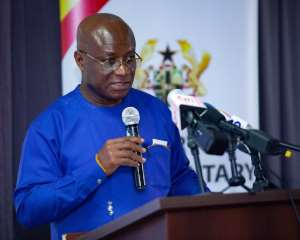 An Accra-based constitutional lawyer has criticised the Majority leader, Osei Kyei-Mensah-Bonsu for some of his belligerent actions on the floor and outside of the floor of Parliament.

According to the constitutional lawyer, the Majority leader since the beginning of the eighth Parliament under the leadership of Alban Sumana Kingsford Bagbin has been misbehaving towards the authority of the Speaker.

The lawyer said the Majority leader sometimes openly questions the authority of the Speaker and as a leader, this must not come from him.

Mr. Paul Kumi made this comment in reaction to last Friday’s proceedings in Parliament where the 2022 budget was rejected.

The Majority caucus walked out of the chamber in protest to the presence of the National Democratic Congress General Secretary Mr. Johnson Asiedu-Nketia in the public gallery of the house during the final debate on the budget.

Speaking on the 'Ghana Yensom' morning show hosted by Kwame Appiah Kubi on Accra 100.5 FM on Monday, November 29, 2021, Mr. Kumi noted that the actions and utterances of the Majority leader on the person of the Speaker are not helping the course of the current Parliament.

He said for the Majority leader who is one of the longest-serving MPs in the house should not be seen attacking the person of the Speaker.

“These actions on the part of the Majority caucus are not being helpful to this current Parliament,” he stressed.

“For the Majority leader to say the Speaker should bow his head in shame over his decision to allow the Minority to reject the 2022 budget presented by the Finance minister, Ken Ofori-Atta during the debate to approve the budget was distasteful,” he said.

'It is amazing how the Majority leader sits down and allows a first-time Member of Parliament for Mpreaso Constituency in the Eastern Region, Davis Opoku Ansah to decide the pace for the Majority’ caucus boycott of the approval of the 2022 budget. It was unacceptable.”

“As a leader, he should not have sat down for a backbencher to decide on the way forward for the caucus during a debate on the floor,” he added.