By Joris FIORITI with Jan Hennop in The Hague
South Africa 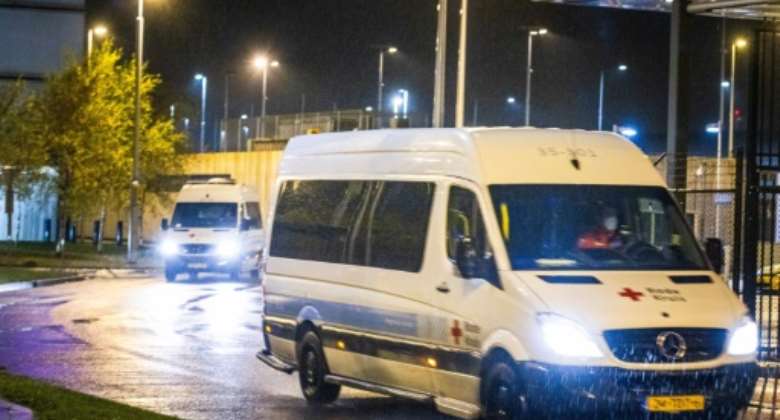 Dutch health authorities said Saturday that 61 passengers aboard two KLM flights from South Africa tested positive for Covid-19 and the results were being examined for the new Omicron variant.

The positive cases -- more than one tenth of the 600 people on the two planes -- were now being quarantined in a hotel near Amsterdam's Schiphol Airport, one of Europe's biggest international air travel hubs.

Passengers said they had endured miserable hours at the arrivals hall to get tested, with witnesses saying many people failed to wear face masks or keep to social distancing.

"We now know that 61 of the results were positive and 531 negative," the Dutch Health Authority (GGD) said in a statement.

"The positive test results will be examined as soon as possible to determine whether this concerns the new worrisome variant, which has since been given the name Omicron variant."

All passengers who tested positive must stay in hotel quarantine for seven days if they show symptoms and for five days if they do not, the GGD said.

Passenger Paula Zimmerman who documented her night via videos posted on Twitter, said she finally received a negative result after hours of waiting but must now spend five days in home quarantine.

People on the plane were "taken from the tarmac to an isolated room where we waited for four hours before being tested," Zimmerman told AFP.

"Everyone on the plane was in there" with little respect for social distancing rules, she said.

Her final video, posted around 0250 GMT on Saturday showed a row of more passengers waiting to be tested while others were sleeping on benches and on the floor.

"Organisation was terrible unfortunately. Lessons to be learned for future," she tweeted.

She described how passengers, including babies and toddlers, were crammed together waiting to get tested, while "still 30 percent of people are wearing no mask only over mouth."

"Dutch authorities not enforcing. We're just in this unventilated room at hour 12, breathing on each other," she said.

On Saturday morning, Nolen was finally free to continue her journey to Toronto in Canada.

"Tested negative. At least today. After all that time with maskless yellers in an unventilated space -- we shall see what the next days will bring."

The Dutch health authority said, "We understand that people are frustrated" by the situation at Schiphol overnight.

"People have just made a long trip with the idea that they will shortly be home," it said.

"Instead just after landing, they are confronted with a situation we have never before experienced in the Netherlands, namely that people have to be tested at Schiphol and are forced to wait until they get a result."

Dutch national carrier KLM said it would continue to operate flights from Johannesburg and Cape Town "in compliance with the stricter protocol".

This meant that entry was banned to all passengers except for Dutch and EU residents, who must show a negative PCR test and self-quarantine on arrival.

"KLM is taking the situation very seriously and will continue to prioritise the safety of passengers and crew," the airline said in a statement, adding "it will therefore impose strict on-board safety requirements for passengers and crew."

A KLM flight from Johannesburg was scheduled to land at around 1100 GMT, Schiphol said on its website.