A/R: House of fetish priest who killed a taxi driver at Ntoraku set on fire by angry youth 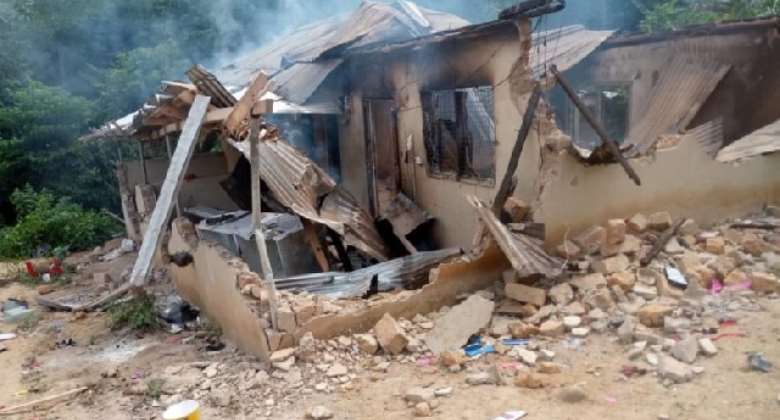 A 3-bedroom house belonging to the fetish priest who allegedly killed a taxi driver at Ntoraku, near Adansi Fomena in the Ashanti Region has been reportedly burnt to the ground by angry youth.

The youth went on a rampage after learning of how the fetish priest shot and killed the unarmed taxi driver.

A statement issued by the police in the region on the matter said the suspect, Collins Asamoah, age 25, a native of Agogoso who was armed with a single barrel gun had gone to confront a man who resides at Ntroaku, for allegedly killing his mother’s goat but did not meet him.

The deceased, Kwadwo Antwi, age 28, who had parked his taxi at the Nkroaku township waiting for passengers sat about 37 feet from the suspect who was adjusting his folded gun at the time, according to a statement published by police investigators.

“That force was applied by the suspect in adjusting the gun which had ammunition and its muzzle facing the deceased accidentally discharged hitting the left side of the chest. Deceased was rushed to Benito Mani Hospital by witnesses together with the suspect but died whilst on admission”, the statement said.

According to information gathered, the youth are still angry and some have threatened that if the fetish priest is released by the Police they will be forced to take matters into their own hands.