Sudan still 'at mercy of military' after PM returns: experts 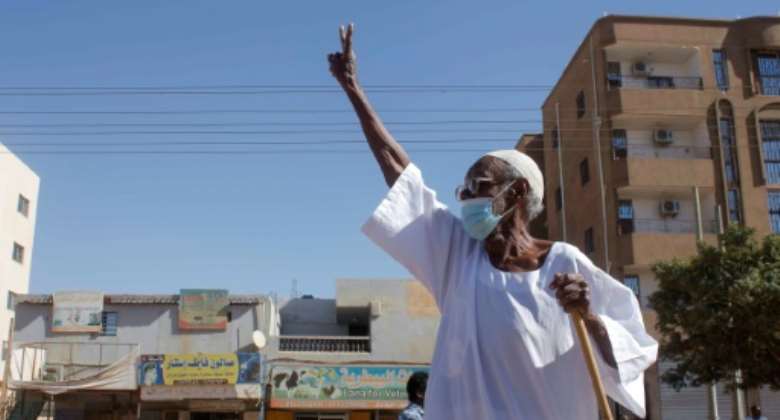 An elderly Sudanese man flashes the victory sign as protesters rally to call for a return to civilian rule in the capital Khartoum on November 21. By - (AFP)

When Sudan's top general reinstated the ousted premier in a televised palace ceremony Sunday, he did not reverse last month's coup d'etat so much as "whitewash" it, say analysts.

Releasing frail-looking Prime Minister Abdalla Hamdok from house arrest may have eased pressure from the international community, but the episode ultimately proved the military's grip on power, they warn.

"The coming cabinet will be under the threat of a coup every day. They are effectively at the mercy of the military," Magdi al-Gizouli, a Sudan expert at the Rift Valley Institute, told AFP.

"It's a complete capitulation of the prime minister and his allies."

Sudan, with a long history of military coups, has undergone a fragile journey toward civilian rule since the 2019 ouster of veteran autocrat Omar al-Bashir following mass popular protests.

A joint military-civilian transition government ruled since then, but the long troubled alliance was shattered on October 25 when General Abdel Fattah al-Burhan launched a putsch.

Burhan sparked international condemnation and a wave of mass protests marred by deadly crackdowns when he detained the civilian leaders and placed Hamdok under house arrest.

On Sunday he formally reversed the power grab, standing beside a haggard-looking Hamdok at the presidential palace in Khartoum.

Together they inked a 14-point deal that officially restores the transition to civilian rule, with a pledge of holding elections in 2023.

The deal sparked relief from the international community and was welcomed by the United Nations.

The African Union hailed "an important step towards the return to constitutional order".

The deal was also greeted by Saudi Arabia and Egypt, which have strong ties with the Sudanese military.

US Secretary of State Antony Blinken tweeted that he was "encouraged" while also calling on "security forces to refrain from excessive force against peaceful protesters".

Britain's minister for Africa, Vicky Ford, said she was "pleased" at Hamdok's return, but warned that the "military must deliver on their commitment to a genuine partnership with civilians".

Protesters on Sudan's streets, however, weren't buying it, with many shouting "no to military power" and demanding the armed forces fully withdraw from government.

Some saw the deal as a betrayal by Hamdok, a former UN economist who has been seen as the civilian guardian of the people power revolution.

A Sudanese protester in Omdurman on November 21; street protests have continued despite a deal announced on Sunday to release the prime minister. By - (AFP)

At one North Khartoum rally, protesters ripped up the premier's portrait and shouted: "Hamdok is weak but the streets are powerful."

The Forces for Freedom and Change (FCC), the main civilian bloc which spearheaded the anti-Bashir protests, but has now been locked out of the transitional Sovereign Council headed by Burhan, strongly rejected the agreement.

The Sudanese Professionals' Association, an umbrella group of unions that was also instrumental in bringing down Bashir, described the deal as "political suicide" for Hamdok.

Sudanese protesters on November 21; over 40 people have been killed in a deadly crackdown since the October military power grab. By - (AFP)

John Prendergast, of The Sentry investigative non-profit group, warned about Sunday's event that "the international community shouldn't be mollified by this single action.

"Unless the entire edifice of authoritarian kleptocracy begins to be dismantled, Sudan will continue to experience waves of conflict, dictatorship and corruption."

"This move simply normalises the coup, this is will be the de facto state of affairs."

Gizouli added that "Hamdok's own future now lies with the military, he will be what they want him to be."

Kholood Khair, of the Khartoum think-tank Insight Strategy Partners, argued that the agreement represented "the effective whitewashing of the coup".

She said, writing on Twitter, that "the past month has shown that international and domestic pressure working in concert can push for change".

Some protesters saw the deal as a betrayal by Hamdok. By - (AFP)

However, Khair added that ultimately the move just allows the military "to regroup", with "absolutely no guarantee that another coup will not take place, and soon."

Khair predicted that Hamdok "will lose credibility quickly and be further isolated", now that his major support base the FFC has been locked out of the political process.

She said Sudan is headed for more "instability" because "the street's core demand was not the release of Hamdok, but the removal of the military from politics".