Why discerning Ghanaians don’t want Mahama at the presidency again? 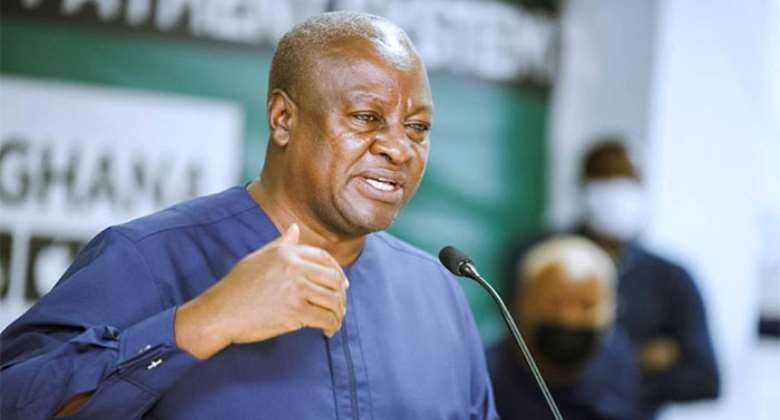 By January 6, 2025, both NPP and NDC would have governed Ghana 16 years apiece and the electorates will have the opportunity to assess the well-performed political party during the fourth republican constitution.

I must confess though, I do not want to go with those who think that since the baton changes hands every 8 years, an NDC presidential candidate will most likely be sworn into office on 7th January 2025.

Of course, that has been the convention. But it is bound to change sooner rather than later.

More so, as elucidated by the reputable Economist Intelligence Unit, the NDC’s 2024 chances will depend on the calibre of its presidential candidate.

I have always held a firm conviction that discerning Ghanaians made a calamitous mistake by voting the NPP administration out in 2008 general elections, as Ghana, as a matter of fact and observation, was heading towards the right direction following the eight years of prudent governance by Ex-President Kufuor’s administration.

But in spite of all the advantageous programmes and policies that put the country in a highly favourable economic position, discerning Ghanaians disastrously bought into the NDC’s propaganda and voted out the NPP administration in 2008.

Let us face it, we need a true leadership with vision and ideas, altruistic leadership devoid of vindictiveness, corruption, greed, Incompetence and capable of transforming us into an industrialized and robust economy.

Some of us were not the least surprised at all when prior to the 2020 general elections, former President Mahama owned up to the unpardonable errors in decision-making which led to the massive economic mess.

There is no denying the fact that the former President made catastrophic mistakes during his tenure in office and therefore could not steer the nation to the right direction.

Therefore, it is quite ironic that former President Mahama and his teeming supporters would move heaven and earth to reclaim the presidency given his terrible errors in judgement which led to the massive economic meltdown.

Strangely, albeit truism, Ex-President Mahama and his NDC loyalists are moving up and down the country and upbraiding President Akufo-Addo who is prudently fixing the unprecedented mess left behind by the erstwhile NDC administration.

Perhaps more than anything else, Ex-President Mahama and his teeming supporters are still holding on to the elusive belief that Ghanaians suffer from memory loss and therefore cannot recollect the revoltingly ugly events which took place under their watch.

If that was not the case, what would then drive the people who brought the country to its knees through catastrophic decision-making to relentlessly accuse someone who is doing everything possible to undo the massive mess?

There is no denying or ignoring the fact that we are more often than not been electing ‘a semicircle’ of negligent and selfish officials whose only preoccupation is to sink the nation deeper and deeper into the mire through unpardonable incompetence and unbridled corruption.

It is absolutely true that Ghana’s economy was in shambles under the erstwhile NDC administration and every honest critic can attest to the fact that Akufo-Addo is steadily fixing the huge mess left by the Mahama’s administration.

Therefore it is quite unfair for anyone to claim that Ghana’s economy under former President Mahama (3.4% growth and 15.4% inflation) was better than President Akufo-Addo’s record before the insidious coronavirus (8.6% growth and 7.5% inflation)?

Given the harsh conditions under the erstwhile NDC administration, it is boundlessly unconscionable for the NDC loyalists to keep insisting that the New Patriotic Party (NPP) administration has rather messed the economy.

Some of us, as a matter of principle, can wholly understand the NDC teeming supporters for blatantly denying the conspicuous vast improvement in the economy under the able leadership of President Akufo-Addo.

That being said, it is intellectually incoherent for any economist to gleefully back the seemingly political gimmicks being thrown about by political propagandists.

Whilst I am a stranger in the economists’ world, common sense will tell me that it is only a failed government that will go to the IMF for policy credibility.

Let us be honest, if the erstwhile NDC administration built a solid economic foundation from 2009 to 2015, why did the government run to the IMF for policy credibility sometime in 2015?

Where was the sound economic foundation under the NDC when 14% economic growth in 2011 dropped to 3.4% by December 2016?

How can the NDC loyalists claim excellence in economic management when single digit inflation was dragged to 15.4% by December 2016?

What do you call solid economic foundation when the agricultural sector recorded negative figures consistently?

Where was the favourable economic foundation when the industry sector recorded dreadful figures?

How can NDC operatives beat their chests and claim ownership of solid economic foundation when the GDP shrunk from $47 billion in 2011 to $40 billion by December 2016?

In fact, no economist can tell us that the Akufo-Addo administration’s well-accepted policies and programmes such as Planting for Food and Jobs, Planting for Export and Rural Development, Rearing for Food and Jobs, One million dollar per Constituency, One District One Factory, One Dam One Village, and tax reductions have not contributed to Ghana’s favourable economic outlook.

To be quite honest, Ghana went into the throes of economic collapse due to the calamitous errors in decision-making under the leadership of Ex-President Mahama.

It is worth stressing that before the insidious coronavirus, the Akufo-Addo’s government efficiently raised the economic growth. Ghana’s economy grew provisionally by 8.5 percent in 2017 compared to 3.7 percent in 2016 (Ghana Statistical Service, 2018).

In sum, despite the corrosive effects of the pernicious coronavirus, the economic growth stands at an encouraging 3.1% with a favourable inflation of 7.8%.

COVID-19: Our responsibility to one another is to get vaccin...
10 minutes ago

Bawku disturbance: Cooperate with government to ensure peace...
18 minutes ago