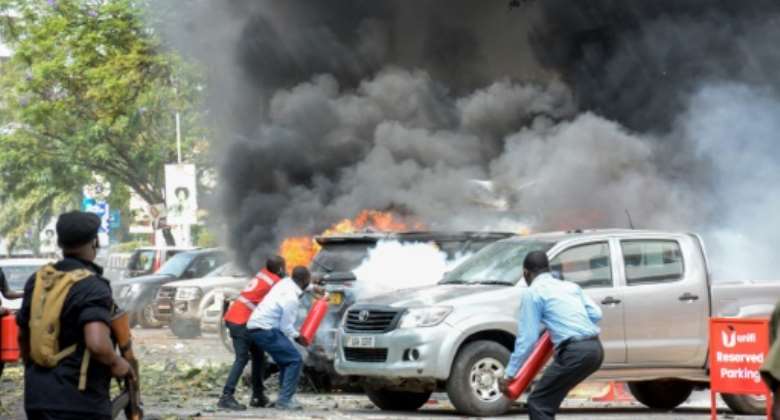 The suicide bombings took place near the Ugandan parliament and the central police station in Kampala. By Ivan Kabuye (AFP/File)

Armed police and soldiers patrolled Uganda's capital on Wednesday after twin suicide bombings claimed by the Islamic State group killed four people, the latest in a string of attacks in the East African country.

Checkpoints have been set up on several roads in Kampala, while the areas where the two bombings occurred in the heart of the capital have been closed off to motorists as teams of investigators scour the blast sites.

US Secretary of State Antony Blinken, on a visit to neighbouring Kenya, said the bombings highlighted the need to improve security across the region.

Tuesday's attacks occurred within minutes of each other, with two suicide bombers on motorbikes disguised as "boda boda" motorcycle taxi drivers detonating a device near parliament, while a third attacker targeted a checkpoint near the central police station.

Ugandan police had initially said they were the work of "domestic terrorists" linked to the Allied Democratic Forces (ADF), an armed group active in eastern Democratic Republic of Congo.

They followed two attacks last month also blamed by Kampala on the ADF, which the United States has linked to the IS group.

"The attack yesterday was a painful reminder of our vital reason why we continue to work together to improve security across the East African region," Blinken told reporters in Nairobi.

Kenya itself has also beefed up security in towns and border areas following the blasts.

Police officers secure the site of one of the bombings near the Ugandan parliament. By Sumy SADRUNI (AFP/File)

Military police were guarding entrances to the sprawling medical facility, which was treating victims, many of them police.

"I did not go to work in the market today because of the attacks yesterday," 31-year-old mother of two Sylvia Nabukeera, who works in Kampala's commercial hub Kikuubo, told AFP.

"I have temporarily suspended work to take care of my kids until it is safe to go to work."

Investigations were ongoing into the blasts, with police hunting for suspects, after foiling a third bombing on Tuesday and shooting dead the attacker.

The arrests followed a bus explosion near Kampala that wounded many people and a bombing at a roadside eatery in the capital that killed one woman.

Uganda also blamed the ADF for a foiled attack in August on the funeral of an army commander who led a major offensive against Al-Shabaab militants in Somalia.

Washington in March linked the ADF to IS, which in 2019 began to claim some ADF attacks on social media, presenting the group as its regional branch -- the Islamic State Central Africa Province, or ISCAP.