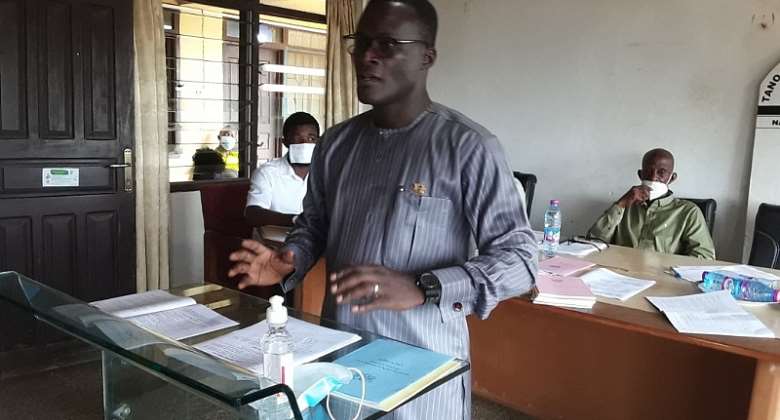 In an opening address, the Presiding Member of the Assembly said, he was very glad and humbled to be given the opportunity to address the august house and also expressed his profound gratitude to the Hon. MCE, Hon. Assembly Members, and Hon. Member of Parliament for the Constituency, Nananom, Heads of Departments and all invited guest for honouring his invitation.

Hon. Antwi said, this meeting provides the platform for Hon, Members to reflect on the development needs and aspiration of our people, and said by so doing take the right decision that would help in the accomplishment of the aspiration and the needs of the citizenry and said the meeting will give an open space and privileges to the participants and Members to deliberate on the developmental polices agenda of the Municipal.

He said, the meeting today is in fulfillment of the Local Government Act 2016, Act 936 and the model standing orders which empower the Members to meet periodically to deliberate on matters of concern and take decision for the best interest of our people we serve.

Hon. Asare Antwi explained that, the meeting should have taken place earlier but had to delay due to re-nomination and confirmation of the Municipal Chief Executive as well as the District Performance Assessment Tool (DPAT) exercise which took place on 11th and 12th October 2021 and urged Hon. Members to continue to eschew all forms of partisan tendencies that could derail their collective effort in accomplishing the desire goals for the betterment and transformation of the Municipality.

In a sessional address, the MCE Hon. Collins Offinam Takyi said, he was very grateful and privileged to address the august house for his second term of office and expressed his utmost gratitude to His Excellency Nana Addo Dankwa Akuffo –Addo, the President of the Republic of Ghana for re-nominating him for the second time and to all Hon. Members for confirming him once again. He also extended fraternal greetings to Hon. George Boakye, the Ahafo Regional Minister, Hon. Benjamin Yeboah Sekyere the Member of Parliament for Tano South Constituency, Nanamon and Heads of Department in the Municipality.

On security, Hon. Takyi said, the Municipality remains relatively calm and peaceful over the period except isolated cases of stealing, armed robbery, land disputes and chieftaincy disputes which the Municipal Security Council is closely monitoring to ensure peace and assured. He assure the Hon. Members, Nananom and Stakeholders that, the Assembly will do all it takes to support the security agency to enable them perform its core mandates and also announce that, Tano South Municipal now has Ghana Immigration Command and about ten (10) officers have been posted to work in the Municipality.

Hon. Takyi, stressed that, the Assembly is embark on a meaningful development project depends on the availability of funds and the Assembly generate and received for the 1st, 2nd and 3rd Quarter of 2021 on the finance aspects.

He said, Agriculture still remains one of the most attractive and important sector that seriously engages the attention of government hence the interventions by the Government to make the sector more attractive it responses to economic growth and stated that, as part of government intervention in effort to improve yield and modernize agriculture to enhance the livelihood of farmers in the Municipality. The Department of Agriculture has also successfully assisted farmer based organization at Mansin, Onwe Nkwanta, Bechem and Derma. He explained that, there was the prevalence of fall army worm in 2018, government through the Department of Agriculture gave chemicals to the municipality to spray farms that are suspected to be affected and he therefore entreated the Hon. Members to inform their community members or farmers to report any suspected case on their farms to the Extension Officers for remedy.

Hon. Takyi addressing on Health issues said, the Government through the Ghana Health Service and the Municipal Health Directorate have commenced the vaccination against the COVID-19 pandemic using the AstraZeneca and Johnson and Johnson vaccines and stressed that, the first phase of the exercise is targeted on health workers. Sooner, more vaccines will be received so that its rolled to cover all communities and encourage the Assembly Members to accept the vaccines as remedy against the spread of the disease when the Ghana Health Service commence the vaccination.

He hinted that, the Government introduced the Free Senior High School policy to increase access and also embarked on massive provision of education infrastructure across the levels to cater for the growing student population in our schools. He indicated in his address that, upon assumption of office of Government, 33 projects in the education sector were started throughout the municipality, nineteen (19) at the Basic Level and fourteen at the second cycle school level. He said, the improvement over the previous performances and no school got 0% as happened in previous performance and the MCE used the opportunity to thank the Municipal Education Director and her management, teachers, parents and all Hon. Members for their collaborative effort which has resulted in this excellent performance. He also entreat all of the Hon. Members to the Municipal Directorate of Education back to school campaign for children who dropped out of after the COVID-19 school break to go back to school.

He thanks Hon. Assembly Members, Heads of Department, Nananom for their support for the past years and request all to work collectively for the development of the Municipality.