Benin cockerel looted by British to be returned by Cambridge University 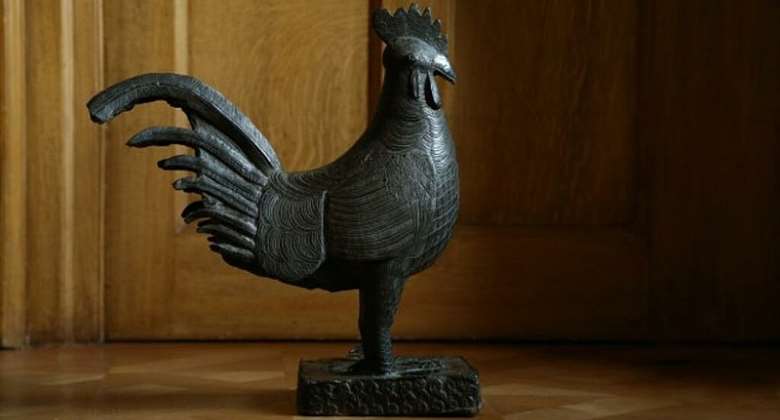 The Oba of Benin was on hand at Cambridge University to sign documents on Thursday, the last step in the handover of a statue of a cock, known as the “Okukur”, that was stolen by the British colonial forces in 1897.

Omo N'Oba N'Edo Uku Akpolokpolo, Ewuare II said that he hoped other countries and institutions would return artworks to the kingdom, especially as many have religious significance.

The Oba is head of the Eweka family of the Benin Empire in what is present-day Nigeria.

British looting
The statue is one of many artifacts looted by the British during a punitive campaign. Trade deals between the kingdom and the British had soured, and the British insisted on visiting the Oba after he requested a delayed visit.

During this time, a number of Edo soldiers ambushed the expedition (reportedly without the Oba's knowledge), and killed nearly the entire British party. This punitive campaign forced the Oba into exile, and the kingdom was decimated by the looters, who sold some of the pieces to pay for the expedition, and they were scattered around the world.

Student initiative
At Jesus college in Cambridge, where the cock was originally displayed and considered a mascot, a classics student in 2013 saw the object and inquired into its provenance. She realized it was given to the college by the father of a student in 1905.

Creating the Benin Bronze Appreciation Committee with others, she looked into repatriating the valuable piece, which they estimated had been originally at the palace.

The statue was unceremoniously removed from the public eye in 2016 until 2019, when the college's Legacy of Slavery Working Party group determined that the rooster should be repatriated.

This is in line with a number of repatriations by Germany, and more recently, the French government, who also signed documents this week at Quai Branly museum in Paris with the Benin government to return 26 items stolen by the French in Dahomey (now modern-day Benin).

After making a number of overtures towards art repatriation in 2017, including a report on the issue, French President Emmanuel Macron was seen as dragging his feet before signing the agreement this week.

In a special Africa-France summit called by Macron this month with members of African civil society and activists, including art experts, he announced that the 26 items would be returned at the end of this month.