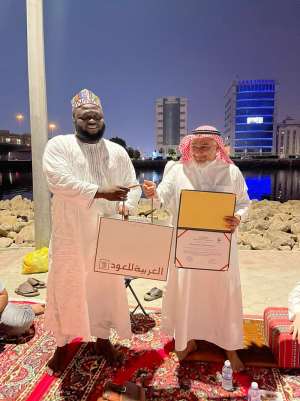 A young Ghanaian Muslim scholar, Sheikh Abdul Muhsin Baafi has been honoured with a citation in Saudi Arabia for his philantropic gestures in improving human lives in society.

At a special ceremony in the Kingdom of Saudi Arabia over the weekend , the scholar received certificates of appreciation for service to humanity from Abar Investment, a renowned Saudi Arabian Foundation, headed by Dr, Adil Abdallah.

The Foundation,which links to Ghanaian Non Governmental Organization in Kumasi for humanitarian services observed that over the years, Sheikh Baafi has impacted positively to alleviate families from extreme poverty in Ghana.

According to Dr. Abdallah, the scholar was highly recognized for providing infrastructural support to communities in the rural areas, especially in the northern sector of Ghana.

He said his outfit has supported number of Africa countries with foreign aids ranging from physical cash, infrastructural development as well as other basic social amenities, all in an efforts to better lives of the vulnerable and less privileged

Receiving the awards, Sheikh Baafi expressed his gratitude to Allah, and to the benefactors for their support in the provision of hundreds of unit classroom blocks to the deprived communities for schools, portable water, among others.

Sheikh Baafi took the opportunity to extend his sincere thanks to Dr. Adil Abdallah, the Chief Executive Officer of Abar Investment in Saudi Arabia of whose support he was able to receive the awards.