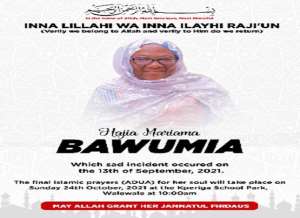 Ghana's most famous Mahama brothers have showed immeasurable love to Vice President Mahamudu Bawumia as the final funeral service of his mother, the late Hajia Mariama Bawumia was observed on Sunday 24th October, 2021 at Kperiga in the West Mamprusi district of the North East Region.

While the former President, John Dramani Mahama supported the Bawumia family with a whopping sum of Ghs10,000, his brother, the business mogul, Ibrahim Mahama contributed Ghs20,000 for the funeral.

Their kind gesture deepened the maximum that in the game of politics, there are no eternal allies and no perpetual enemies, only permanent interests.

When the death of Hajia Mariama was announced, the NDC 2020 Presidential candidate personally called and consoled the Vice President.

As officiated by the National Chief Imam, Alhaji Dr. Osman Nuhu Sharabutu, President Nana Addo and his wife Rebecca were among high profile personalities from all walks of life in attendance. 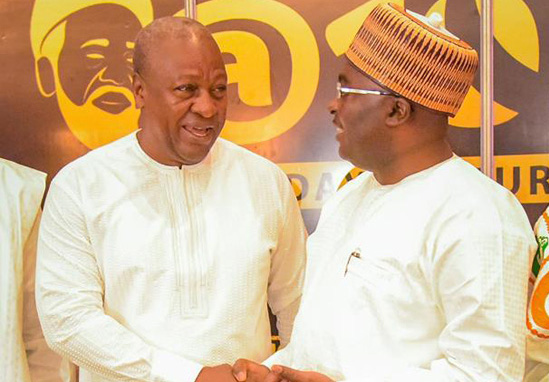 “We thank her for her service to her family, community and nation. May her soul rest in perfect peace in the bosom of the Almighty until the last day of the resurrection when we shall all meet again, amen.”

The National Chief Imam, Sheikh Osman Nuhu Sharabutu underscored the need for people to be guided by the holy verse that death is inevitable and strengthen peaceful co-existence.

“Our mother who has departed, needs nothing apart from our prayer. If you observe what has brought us together here, and the beauty of this gathering, it tells you that we are truly united.

In an emotional tribute, the Asantehene, Otumfour Osei Tutu II refer to the late Hajia Mariama Bawumia as a matriarch.

"As we idolize and eulogize great men and great leaders, we so often fail to acknowledge the role of the faithful women behind the mounding of their mettle. But truly it is said that behind every great man is the hand and the heart of a faithful and devoted woman. And to a few women that goes even greater honor of becoming the matriarch from whose impact on Ghanaian politics will be felt for generations.”

"She was not only the steady heart behind one of the titans of politics in the North during the most tumultuous periods of Ghana’s history, but her guidance and tutelage has produced a family whose impact on Ghanaian politics will be felt for generations," the Asantehene added.

Yakubu Bawumia read the family tribute and said Hajia Bawumia was a mother for all. “Even though our father had 19 children, it was difficult for any outsider to differentiate amongst us who Hajia Mariama’s biological children were. She treated us all the same. Maame was very kind at heart and had a very good sense of humor. She therefore got on very well with many people.”

“She was very tolerant and empathetic and would give away most of the money we gave her to other people.”

They said Hajia Mariama was a pious Muslim. “She was kind, caring and a loving mother. We could not have wished for a better mother.”

The late Hajia Mariama Bawumia affectionately called Maame was the mother of Vice President Alhaji Dr. Mahamudu Bawumia who passed on Monday, September 13, 2021 in Accra, at 81.

As a native of Kpasenkpe, a community in the West Mamprusi Municipality, she was one of the first female students from the north to gain admission into the Wesley Girls High School in Cape Coast, in the Central Region.

Immediately withdraw your directive to Goil; it's dangerous ...
4 minutes ago