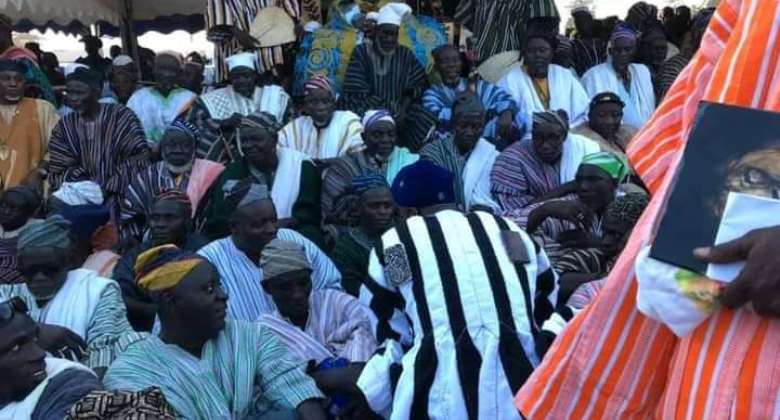 About thousand of sons and daughters of Dagbon and other tribes from all walks of life on Sunday joined the overlord of the Dagbon Traditional Area at the Gbewaa Palace in Yendi to mark this year's Naa Damba celebration.

All rituals relating to the Naa Damba including the slaughtering of cows were performed at the forecourt of the Gbewaa palace led by Ndan Ya-Naa Abubakar lI before the evening session of the festival was held. Horse riders and other celebrants displayed their dancing moves to the excitement of the gathering.

Addressing Journalists at the event ground, the Public Relations Officer at the Gbewaa Palace, Mr. Yakubu Musah mentioned that the Palace had modified this year's celebration to make it attractive to drive home investors and support to the kingdom.

According to him, as part of the new Dagbon, His Royal Highness Ndan Ya-Naa Abubakar lI in consultation with stakeholders have set up a development fund to pursue the development of the kingdom

Mr. Musah appealed to individuals and corporate bodies to support the Dagbon Development Fund (DDF), stating that the development fund is geared to improve sanitation, water challenge, education, infrastructure, Agriculture and other social vices in the traditional area that needs attention.

He charged individuals in and around Dagbon to help consolidate the current peace of the area, adding that 'if Dagbon is not sleeping Ghana cannot sleep".

The Minority leader in Parliament who doubles as the Member of Parliament for the Tamale South Constituency, Hon. Haruna Iddrisu on his part commended the overlord for initiating the Dagbon Development Fund and the review of the Dagbon constitution.

He pledged the Dagbon caucus in Parliament commitment to continue to support the developmental agenda of the kingdom at any given opportunity.

According to him, the fund will largely benefit the youth of the area, whilst the review of the Dagbon constitution will help find solutions to the Chieftaincy challenges.

Support to the Dagbon Development Fund.

On behalf of the overlord, the Chief of Karaga, Kari-Naa Abdullahi Nantogmah thanked the donators and further appealed for more support.

The theme for this year's Damba is under the theme: "Together we Build a Better Dagbon".

In a related story, His Royal Highness Nyab Nyelinbolgu Naa Yakubu Andani, the regent of the Nanung traditional area together with his sub-chiefs joined thousands of Nanumbas and other tribes across the globe to celebrate the Naa Damba festival.

The area Naa Damba has been described by many as the biggest in the history of the kingdom.

It was massive and the Nanung culture came supreme again.

In the evening today Monday, the regent will hold the final phase of the celebration to say goodbye to the 2021 Damba festival.

A brief history of the Damba festival

The Damba festival is categorized into three main festivals, namely: Somo Damba, Naa Damba and Belkusi Damba. it is celebrated under the lunar calendar by the people of Dagbon, Mamprugu, Gonja and Nanumba of Nothern Region.

The significance of the festival is to commemorate the birthday of the Holy Prophet of Islam, Mohammed, but the actual content of the celebration is a glorification of the chieftaincy. Damba festival is in effect a thanksgiving festival and a time for families to meet, and socialize.

It is also for auditing and evaluating the past and planning for the future. This is the period for the Gbewaa family like the Dagbamba, Mamprusi, Nanung, who reside outside return home for the festivities.

Also, Gonjas, Waala and the Mossis celebrate Damba as part of the Tradition.

Activities include prayers and fasting and procession of people on horseback, exchanging of gifts, shooting of muskets and display of warrior dance amidst drumming and dancing.

For the first ten days or nights after the appearance of the new crescent moon of Damba month (on the Dagbon calendar), young people gather at the chief’s palace for dance rehearsals. They are called to the palace by the beating of drums every night.

This is an opportunity for young people to practice their dance forms from the elders. During this time, women may also gather to sing praises to the chiefs for their exploits, enticement and bravery at the palace for ten nights.

On the 11th day of Damba, the second part of the festival takes place. In the morning, the Muslim chiefs and their disciples come to the palace where a bull is slaughtered according to Islamic ritual.

Those present form a circle around the bull and walk or jump over it three times. During this exercise verses of the Holy Quran are recited. The bull is slaughtered and the meat is distributed for feasting.

One confirmed dead in youth, Police clash at Kotobabi Market
21 minutes ago