The speech Professor Mills should have given 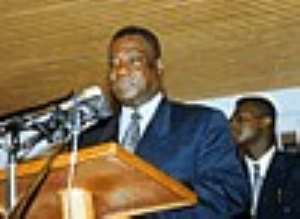 Following our story on Professor Atta Mills' decision to contest the presidential candidature for the NDC, we received this letter from Professor Stephen Kwaku Asare in the US. As a former student of Professor Atta Mills, I was embarrassed by the speech that he gave when he announced his ambition to contest for the presidential candidate of the NDC. But like a good former student, I hereby produce the speech that my former lecturer should have given. I promise to come out with a similar speech for my other former lecturer, Kwesi Botchwey, at the appropriate time. Fellow countrymen: During my 1-year sabbatical in Canada, I had time to reflect on my association with the NDC and on my tenure as the Vice President. Based on these reflections, I am here to apologize to the nation and the taxpayers of this country for my poor stewardship and participating in this charade that we called the NDC. The NDC as it operated then was nothing more than an engine to redistribute wealth to party functionaries and hangers on and oppress the people. As a former law lecturer and a theoretical expert on human rights, I feel embarrassed to have been associated with the NDC, which had its genesis and modus operandi from the PNDC. I was around when Selassie Djentuh was given an identification haircut.

I was around when his parents were given a prison term on grounds that they "beat" an armed castle guard. I was a silent participant in the intimidation of the press, the judiciary and the manipulation of the legislature. I was privy to the commingling of the NDC funds and the state's funds.

My experiences and reflections in Canada have pricked my conscience and I now admit that I should have rejected these illegal and inappropriate acts.

I was around and, indeed, I was the head of the team that initiated and executed the Quality Grains deal. I was also aware of the financial shenanegans in the Presidential jet saga and knew about Selormey's illegal transfers as well as Tsatsu's illegal guarantees of the Valley Farm Loans deals.

These self-dealings were nothing more than clever attempts to transfer state resources to individuals affiliated with the NDC. I have wept so many times about how I could have stopped the rot but failed to muster the courage to do so. In retrospect, I now see that I should have put love for nation ahead of conforming to party dictates.

I erred seriously and ask for your forgiveness. Many were surprised when I said two years ago that I did not know my salary as the Vice-President.

However, that was and is the truth. I should have added that as a vice-president and a member of the NDC, I lived largely on the state. Again, my stay in Canada has now opened my eyes to the need to separate my personal finances from the state's. It won't happen again.

What has happened in the past has happened and I cannot change them. But this nation is young and our future lies ahead of us. I now offer myself as a catalyst of change for the future of this party that we call the NDC.

I offer myself as the presidential candidate and leader of the party with the sole purpose of breaking this party's umbilical cord to the PNDC's modus operandi, record and all those associated with it. We reject all forms of violence and disrespect for law and order.

I am willing and eager to cooperate with the current government to get to the bottom of the massive abuse of funds that took place under the NDC watch.

I am extremely revolted by the news that Mr. Rawlings has bought 4 cars worth $300,000 and is now paying tuition of over $100,000 a year for his kids in Europe. Where did he get this type of money? I know and I will let the state agencies know as soon as possible.

The abuse of human rights and state resources that took place under our watch was classic asymmetric barbarism. It calls for TRUTH and ACCOUNTABILITY not TRUTH and RECONCILIATION.

The past must be searched and those who broke the laws must be punished. We must ensure that our posterity understands that nobody is above the law and there are no prophylactic and indemnity clauses strong enough to shelter evil-doers and nation wreckers.

I call on all peace loving Ghanaians to reject any attempts to bury the past in the coffin of forgiveness and reconciliation. Not only must the truth be known but justice must also prevail.

I ask President Kufuor to set up a NRC for NATIONAL REFORM COMMISSION to review this great country's governance structures and come out with recommendations on how we can form a mean and lean government that works for the people. This NRC should start with the constitution, which is fraught with many problems and extend to chieftaincy which has become an anachronism as we saw in Yendi.

I ask the president to immediately withdraw his nomination of the additional Supreme Court Justices until the NRC has done its job. We cannot be a nation of 20 million people with no caps on how many people can be on the Supreme Court.

I thank you for coming to hear me at short notice and I look forward to meeting with all my friends and supporters. Thank you and God bless Ghana.