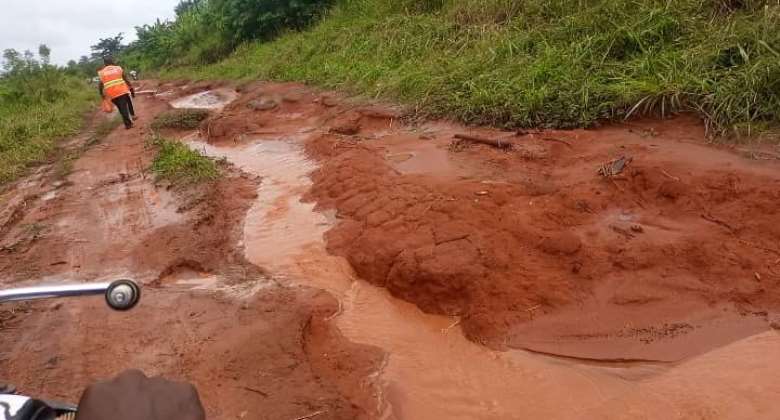 One major problem impeding the rapid development of the Upper Manya Krobo District in the Eastern Region is the poor road network.

The situation is greatly affecting the residents leading to the continued high post harvest losses, charging of exorbitant transport fares and decline in healthcare deliveries.

This unfortunate revelation came to light at a communal labour organized by the members of some seven farming communities to help weed the arms of the 14.5 kilometer Asesewa - Sawa - Akorkorma Sisi road.

The residents lamented that they go through a lot of difficulties getting their farm produce to the market centers and sick ones to the Asesewa Government Hospital for medical attention.

They say the only reliable means of transport available for them is motorbikes popular known as "Okada". The situation worsens whenever it rains and on non-Asesewa market days.

According to them, they sometimes have to trek for about three to seven hours to Asesewa township.

The Assembly Member for Anyamoni-Akorkorma Electoral Area, one of the organizers of the clean up exercise, Gabriel Kudavor said the deteriorated road network is so unbearable and disturbing, hence, the collective decision by the members to help make it quite motorable and visible for the road users.

He said even though that stretch is part of a 24 kilometer road under construction, the contractor has abandoned the work and left the site long ago.

Mr. Kudavor said the exercise was also an opportunity to invite the DCE to have first-hand information of the situation so that he can at least use his good offices to grade the road.

The Assembly Member appealed to government to as a matter of urgency bring back the contractor to site or re-award it.

On his part, the DCE Joseph Sam applauded the people for their communal spirit.

As part of efforts to augment the government's plans to construct the roads, the DCE implored other communities to emulate this example.

Mr. Sam promised to liaise with the appropriate institutions to help reshape the roads.

Adwoa Safo impersonation: Findings from our preliminary inve...
32 minutes ago

Acting Speaker Joewise throws out minority’s motion to overt...
47 minutes ago