Shatta Wale to spend another night in police cell; to face court tomorrow 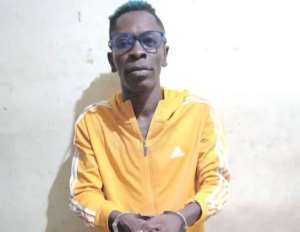 He will be arraigned before court on Thursday, October 21, 2021.

The controversial artiste reported himself to the Police on Tuesday where he was arrested for faking a gunshot attack.

Having spent last night in police custody, his camp hoped he would be granted a police enquiry bail today to breathe fresh air.

Unfortunately, with no bail granted, Shatta Wale will again spend the night in the police cell.

Born Charles Nii Armah Mensah, the police took the ‘Ayoo’ Hitmaker to his house for a search today.

He was subsequently returned to the police station where his charge has been finalised.

He will tomorrow be arraigned before court for causing fear and panic.

Although Shatta Wale has apologised for his action, lawyers say he could be jailed for up to five years for staging a gunshot attack.