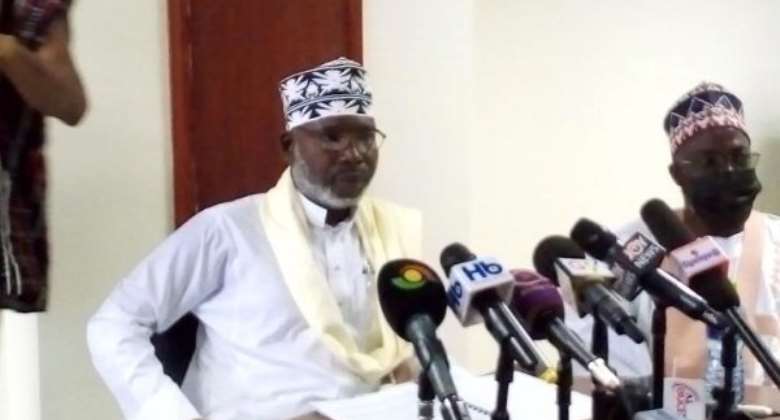 A delegation from the Anbariya Sunni Community, an independent Islamic Religious and Cultural Organisation based in Tamale of the Northern region has submitted a memorandum to Parliament on the Proper Sexual Rights and Ghanaian Family Values Bill under consideration.

It was presented to the Clerk of Parliament's Committee for Constitutional, Legal and Parliamentary Affairs on Tuesday, October 19, 2021 in Accra.

Sheikh Abdul Samir Issah Iddris, Leader of the delegation speaking to the media at a press conference said the group supported the anti-LGBTQ Bill and hoped that it would be passed into law to help maintain humanity.

He said the Bill was to shape and maintain the status quo with regard to the human values as Ghanaians and to avoid issues of gays, lesbians etc. which are anti-proper human sexual knowledge.

Sheikh Iddris added that Anbariya as a religious group identified with Ghanaians whether Moslems or Christians.

He stated that the practice of LGBTQ is something that is likely to undermine the existence of the human species, adding that if people should stop the normal heterosexual practices and follow the LGBTQ activities 100 from now there would be no reproduction.

Minority Leader, Haruna Iddrisu who represented one the Anbariya Sunni Community in Tamale South said the memorandum submitted by the group was to make an input into the anti-LGBTQ Bill which is before Parliament.

He said the essence of the gazette notice was to allow members of the public and citizens of Ghana to be aware that the Bill is before Parliament and as citizens they can contribute to improve it.

Mr Iddrisu stated that the NDC Minority in Parliament remained resolute and unequivocal in their opposition to the introduction, formalization and legalization of LGBTQ practices in Ghana.

He said the country's society have no room to accommodate LGBTQ practice for its continuity and existence, saying the Anbariya Sunni Community would not be the first or last group to petition Parliament.

“Petitions are received from some academics, some from human rights persons, some from the National Chief Imam, and from some Christian Faith groups our country” he added.

Mr Iddrisu said the anti-LGBTQ Bill is a watershed decision for the Parliament of Ghana and the legislature has moral duty and owed the people of Ghana the standard of care to reflect their aspirations for the preservation of the society based on those sound values and practices over the years.

About 20 members of Parliament have initiated processes to have a law passed to criminalise LGBTQ activities and advocacy and also jail LGBTQ people, their sympathizers, and funders.

The bill, dubbed “The Promotion of Proper Human Sexual Rights and Ghanaian Family Values Bill 2021,” has received wide public support, with a section of the public condemning it and describing it as promoting hate.

The Christian Council and the Office of the National Chief Imam have already declared their support for the bill.