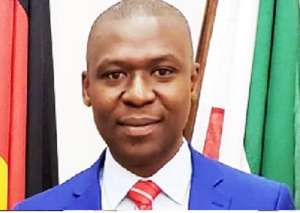 Two Cape Coast Members of Parliament have rejected the supposed confirmation of the President’s nominee for the Chief Executive position of Cape Coast Metropolitan Assembly.

Mr. George Kwaku Rickets Hagan of Cape Coast South and his colleague Dr. Kwamena Minta Nyarku of the Cape Coast North who jointly addressed the press some moments after the chaos expressed their disgust at the occurrences during the process.

Member of Parliament for Cape Coast South who first addressed the media noted that allowing Mr. Ernest Arthur who had failed twice to get two –thirds of votes for his confirmation would spell doom for the Central regional capital.

According to him, there was the need to get rid of what he described as thuggery which had taken over the town.

“Cape Coast has been visited with thuggery and the earlier something is done to deal with the thuggery, the better it would be for the people of the city.

“Cape Coast by nature is a peaceful town with peaceful people, we cannot have this ‘thug’ here running the show and doing criminal things to stay. I am alerting the people of Cape Coast the danger this ‘thug,’ Ernest Arthur, presents.

“I don’t want the situation where someone would bring me my stone one day. This thug must not be allowed to continue his thuggery.

“And if care is not taken and this issue is not addressed and a re-election or cancellation of the election does not happen, Osabarima, this man presents a danger to Cape Coast,” he noted in angrily.

His colleague from Cape Coast North, Dr. Kwamena Minta Nyarku reiterated the need for annulment of the Sunday’s voting and a preparations made for a new, clean voting process to confirm a Chief Executive for the ancient town.

The MP could not hide his disappointment at what he felt was a forceful imposition of the nominee on the people of Cape Coast even in the presence of the Paramount Chief of Cape Coast.

“We were happy about the presence of Osabarima [Kwasi Atta II]. We thought it was going to change things but his presence did not make the people conform to the procedure. And I am disappointed.

Mr. Ernest Arthur’s confirmation process was riddled with controversies from the beginning to the end as he had already been rejected twice.

During the voting on Sunday, October 17, 2021, there appeared to be peace until counting of the ballots begun. A man who could not be identified with either NPP or NDC run across the counting arena and picked up some ballot papers, sparking misunderstanding and a free for all fight.

The police had a hectic time bringing the situation under control but some assembly members, supposed to sympathetic to the opposition NDC joined their two MPs to declare the election null and void.

The EC however announced that, out of the 63 Members who voted on the day, Mr. Ernest Arthur polled 45 YES and subsequently confirmed him.

He was immediately sworn in by a judge.

Immediately withdraw your directive to Goil; it's dangerous ...
11 minutes ago