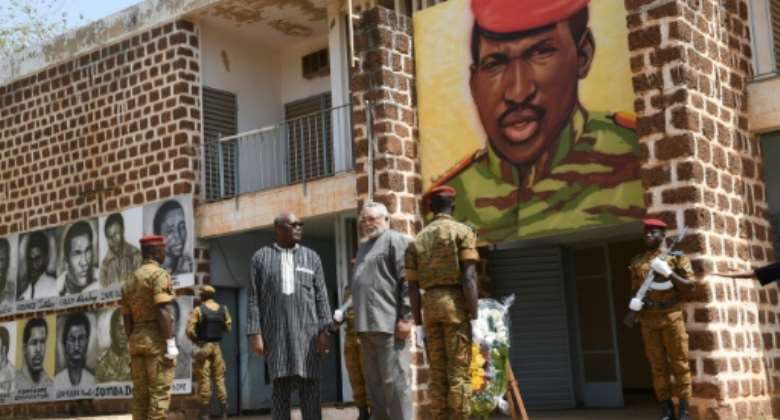 The memorial has become a symbol of the rehabilitation of Thomas Sankara, whose life and legacy had become a taboo during the 27-year reign of his former friend and comrade-in-arms Blaise Compaore. By ISSOUF SANOGO (AFP/File)

As the rain drizzles down, visitors flock to the Thomas Sankara memorial in Ouagadougou to snap photos or buy souvenirs with the effigy of the revered leftist leader whose life and death were once taboo.

Since its inauguration in March 2019, the memorial has become a symbol of the rehabilitation of Sankara, who was riddled with bullets in a 1987 coup that saw his friend and comrade-in-arms Blaise Compaore come to power.

The death of Sankara, a pan-Africanist icon who had ruled Burkina Faso for four years, became a hugely sensitive topic during Compaore's subsequent 27-year rule that ended with his ouster in 2014 street protests.

The trial of his alleged killers opened Monday before a military court in the Burkinabe capital, in the absence of Compaore, the main defendant who lives in exile in neighbouring Ivory Coast.

The memorial site for Sankara was built where he died.

It attracts an average of 8,000 visitors each month to what has become the most visited tourist spot in the country, according to the Thomas Sankara International Memorial Committee.

"Sankara is a brand that sells very well," says Prosper Simpore, a pro-Sankara activist and trinkets seller, smiling behind a table crowded with objects featuring images of the man who became known for his ambitious reform programme, defiance of big powers and anti-colonialism.

He banned female genital mutilation and forced marriages, among other measures to promote women's rights.

There is also a cup inscribed with a phrase he famously used: "Woe to those who gag the people."

"Drinking from a cup with the picture of Sankara is like feeding on his ideals on a daily basis," says Justine Noelle Zoungrana, a 29-year-old civil servant.

Sales of these products have exploded since the 2014 insurrection that brought down Compaore.

Sankara stalls can be seen at major road junctions and large popular gatherings.

"During the Compaore regime, you had to be brave and bold to come out with Sankara's image," says Karim Sawadogo, a 50-year-old buyer.

"Those who dared to put stickers on their mopeds stuck them in places that were not very visible (...) otherwise, you were immediately labelled as an opponent of the regime."

But today, "wearing a Sankara t-shirt or having another object with his effigy is a symbol of freedom, of regained pride," says Simpore.

He adds that the majority of buyers are under 35.

"They did not know the revolution or were still very small," he says, referring to Sankara's fiery rhetoric and radical policies, which inspired a following across Africa.

"Having these objects makes them relive that time and feel close to the father of the revolution, to his progressive ideology."