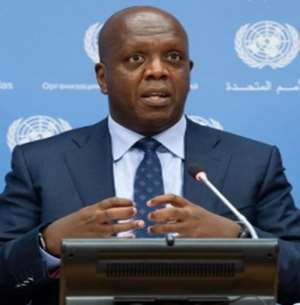 BMS7 took place in New York, in July. In this interview with Africa Renewal’s Franck Kuwonu, Ambassador Kimani, chair of the Seventh Biennial Meeting of States (BMS7) to consider the Programme of Action to Prevent, Combat and Eradicate the Illicit Trade in Small Arms and Light Weapons in All Its Aspects (PoA) and its international Tracing Instrument (ITI), talks about the proliferation of dangerous firearms in Africa, and welcomes efforts to trace ammunitions.

These are excerpts from the interview:

As the Chair of the meeting, what would you consider the key takeaways?

It was a big privilege for Kenya and, I think, Africa to chair the Seventh Biennial Meeting of States because if you look across different conflict situations in Africa, the impact of small arms and light weapons is so destructive. The AK-47 rifle has probably claimed more African lives than many diseases. And so, for Africa being part of this global framework, it is extremely important to the security of our people and the security of our states.

This was the first disarmament conference since the beginning of COVID-19. Other conferences have been postponed because of the pandemic and we had to push to hold the meeting. Many delegations had a very difficult time meeting virtual teleconference platforms, but in the end, we were able to meet and have a unanimous outcome: 114 votes in favor, zero against and zero abstention.

In that outcome, we recognized the need for the equal and full participation of women and civil society in all the decision-making and implementation processes related to the Programme of Action.

There was also recognition that the debate on illicit weapons also needed to include ammunition. There is a parallel ongoing discussion on that, but this was a big deal because it has been fought for 20 years. The point was agreed at one of the meetings, a couple of years ago, but somehow some countries called for a vote on that specific paragraph to basically show their disagreement. But this time, those very countries, for example, the United States, embraced the paragraph, showing that we are moving forward.

Tracing, stockpiles management and the emergence of new technologies in arms manufacturing were the main issues discussed?

Another aspect is the secure management of national stockpiles, which is instrumental in curbing proliferation. So, when you are not able to protect the legal small and light weapons that you have, that's a huge means through which they are diverted from the legal to illicit market.

In 2001, countries adopted the Programme of Action to Prevent, Combat and Eradicate the Illicit Trade in Small Arms and Light Weapons in All Its Aspects (PoA). In it, governments agreed to improve national small arms regulations, to strengthen stockpile management, to ensure that weapons are properly and reliably marked, to improve cooperation in weapons tracing, and to engage in regional and international cooperation and assistance.

In 2005, the General Assembly adopted the International Tracing Instrument (ITI), which specifically provides a framework for cooperation in weapons tracing – thus fulfilling one of the commitments governments made in the PoA.

Improving weapons tracing is also part of the 2030 Agenda for Sustainable Development.

Meetings and national reports on PoA and ITI are always combined.

A conference to review the progress made in the implementation of the PoA is convened every six years. Between review conferences, Biennial Meetings of States (BMS) are held. Additionally, States have held Meetings of Governmental Experts (MGE) to benefit from the knowledge of technical specialists on matters pertaining to small arms and light weapons control.

Apparently, the application of new technologies—the use of material such as polymers, 3-D printing, and other modular designs—is making it more difficult to address tracing? Did the meeting come to an understanding on the way forward?

Well, these emerging technologies are all about improving the performance of these weapons and reducing the costs of making them, but they create new challenges for tracing or detecting them.

Some are made of materials that prevent scanners from detecting them at various security points. It is conceivable that someone can put such a weapon in a bag and a scanner cannot detect it. Technology is moving so fast, and many countries have a hard time in terms of human and financial resources to catch up.

We agreed that this would form part of the next review conference in 2023 so that we can discuss more issues about how to mark, record-keep and trace these kinds of weapons, especially those in danger of falling into the hands of terrorists or ending up in conflict areas. I hope that between now and 2023, there will be more discussion on this and, frankly, more capacity building for countries that are having a hard time.

You talk about countries having hard times. Are developing countries, for instance, the only ones having a hard time catching up with the new technologies or is it a widespread issue?

It is very widespread. In fact, only a handful of countries are meeting the technology challenge. Most of the world is still trying to play catch up. And it's really a race between those who manufacture these weapons and those who regulate them, to make sure that the regulators have the capabilities to keep up with the manufacturers. As you know, the manufacturers are in a small number of countries. So, it is a global issue, really.

How about the management of stockpiles? Would you say the unfortunate explosions in armories in Equatorial Guinea in March this year and the other one in Beirut, the year prior, highlighted the need for better management?

Many arms stockpiles exceed the immediate need and even, sometimes, the projected future needs. When there is a conflict and the management of those stockpiles is weak, those arms are sometimes diverted into illicit traffic. But I think—of course, I am sorry about the tragedy in Beirut—the greatest case of this specific question is the stockpiles of arms that emerged in Libya with the fall of the Gaddafi government. Those stockpiles were immense. The conflict basically opened them up and those weapons spread into the Sahel. Today, thousands of Africans who have been killed in the Sahel by terrorist groups have been killed by the stockpiles diverted out of Libya following the fall of that government. In fact, the stockpile of weaponry that the Libyan government had was far beyond its needs. And now many of those weapons are making their way, from hand to hand, throughout the Sahel and other parts of Africa.

Which begs the question: did Sahelian countries have specific expectations going into the meeting?

That question goes beyond the PoA and gets to some of the work that we are doing in the Security Council. There is a lot of concern about terrorist organizations in the Sahel. Some of them have pushed states almost to the brink. In Mali, it has required the intervention of a UN force to just hold these terrorist groups back. This is really a matter for the whole of Africa because when you look at the map of Africa, you will see a proliferation of terrorist organizations that have links either ideologically or politically to Al-Qaeda and ISIS. And these terrorists have retreated from other parts of the world to different African countries. I think they are one of the most potent and dangerous challenges that Africa must deal with currently.

A few days ago, you said an AK-47 doesn’t kill. What kills are bullets. What did you mean?

The PoA has focused on guns. But a gun without ammunition is just a dead tool. So, it seems common sense that ammunition would be at the center of the discussion of small arms and light weapons. Acquiring or smuggling ammunition poses a grave danger and risk to all of us. We are glad that ammunition is now coming to the heart of the discussion. There is another process going on in the General Assembly on the issue of ammunition. And I am looking forward to that process being completed and its recommendations and findings being incorporated in the Programme of Action in the future.

As the Kenyan Permanent Representative, were there any expectations from your country? If so, what were those and were they met?

Well, Kenya is one of the leaders on this agenda. We have a regional center on small arms that is a center of excellence. We have porous borders. We live in an unstable and fragile region, illicit small arms and light weapons exact a price on the lives of Kenyans. So, by leading this process, we hope that Kenyan lives can be better protected.

Any final thoughts, especially on young people? They appear to be easily drawn to armed violence.

When you're young, you have a long life ahead of you. And what that means is that a lot of your dreams and your aspirations require peace and security to be achieved. Peace and security are a public good and everybody must contribute to them.

And young people need to know that if we have security, we have a chance to work for peace that comes out of a more cohesive national and continental population. The day we have that cohesion, the day we are not so uncomfortable as Africans that we fight one another, that is the day we shall become the richest, most vibrant continent on earth. We are a sleeping giant. Peace and security will wake us up.