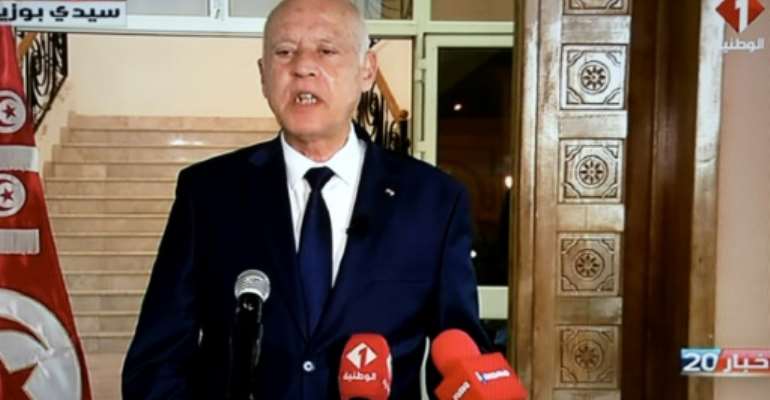 Tunisian President Kais Saied, seen in this September 20, 2021 picture, presents himself as the ultimate interpreter of the constitution who has announced moves that fundamentally alter the North African country's post-revolutionary political regime. By FETHI BELAID (AFP/File)

Kais Saied, a political newcomer when he won Tunisia's 2019 presidential election, rules by decree in a break with the country's post-revolution political elite.

Elected on a slogan borrowed from the Arab Spring uprisings -- "the people wants" -- Saied has used similar discourse in recent weeks to justify a string of moves that fundamentally alter Tunisia's post-revolutionary political regime.

An austere legal academic, Saied this week announced measures that effectively allow him to rule by decree, weeks after a power grab which opponents labelled a coup.

The former law professor had on July 25 sacked the government of Hichem Mechichi and suspended parliament, presenting himself as the ultimate interpreter of the constitution.

Saied in 2019 rode a wave of popular support to power, capitalising on anger at the failings of a corrupt and often deadlocked political system since the 2011 revolution that ousted dictator Zine El Abidine Ben Ali.

Slender, white-haired and usually dressed in a sombre and sharp-cut business suit, the 63-year-old has shown little inclination to negotiate or compromise, despite the country's economic and health crises.

Difficult to politically classify, he is conservative on social issues, including being opposed to equality between men and women in matters of inheritance, or to the abolition of the death penalty.

Yet he bitterly opposes the Islamist-inspired Ennahdha party, which was the strongest group in the coalition government, and which labelled his July 25 moves a "coup d'etat".

Saied, who was at the Tunis faculty of judicial and political sciences for nearly two decades, has demanded a complete overhaul of the government system -- in strict compliance with his views of the law.

Since Wednesday's announcement, he rules by decree, passing laws without the need for a vote in parliament, which remains suspended.

The president "exercises executive power with the help of a Council of Ministers" with a head of government -- yet to be named -- acting as his deputy.

In January, he refused to receive the oath of ministers, believing corruption allegations they faced prevented him from doing so.

Before his 2019 election -- in which he took nearly three-quarters of the vote -- he was mainly known for his legal analysis as a television commentator during the drafting of a new constitution.

Critical of the parliamentary system and the partisan compromises it requires, Saied has championed a vision of radical decentralisation, advocating the election of local councils whose members can be dismissed during their mandate.

Saied, who claims legitimacy directly from the people, argues this will promote the will of the people and help end corruption.

The International Crisis Group think tank calls Saied the "leading representative" of a "new wave of 'sovereignist' politicians" but said in 2020 his "have remained ambiguous".

Born on February 22, 1958, son of a civil servant, Saied grew up in a middle-class suburb in southern Tunis, and he has generated an image of a frugal lifestyle.

His wife is a judge, and they have two daughters and a son.

He cultivates an air of old-fashioned formalism, sometimes giving speeches with flourishing rhetoric of formal classical Arabic, and writes letters carefully by hand with traditional calligraphy.

Once, in the run-up to 2019 polls, some dubbed him "Robocop" for his stern manner and conservative demeanour.

But after he was seen sometimes receiving disaffected young people who came to plead their cause, whom he comforts with a big embrace, he earned a new nickname from some -- the "president of hugs".