By AFP bureaus across the Maghreb 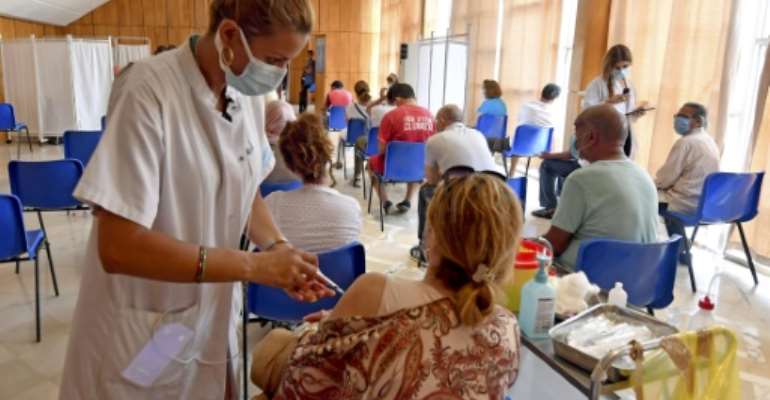 Tunisian health officials credit a rapid mass vaccination campaign with putting the brakes on a surge in Covid infections which overwhelmed hospitals across North Africa over the summer. By FETHI BELAID (AFP/File)

Here is a look at the situation in the four countries of the Maghreb -- Tunisia, Morocco, Algeria and Libya -- based on official figures collected by AFP.

Images of intensive care units overwhelmed with Covid patients in July sparked outrage in Tunisia, which has suffered the region's highest number of deaths per head from the virus, with around 24,500 in a population of 11.7 million.

At its peak, the latest wave saw more than 55,000 new infections between 7-13 July -- a weekly figure seven times the current rate. The past seven days saw 342 deaths from the virus -- just a fifth of the toll in the last week of July.

Authorities responded to the surge with a strict early evening curfew and travel restrictions. Neighbouring Libya closed its border with Tunisia. Those measures have now been eased.

"There's the effect of mass vaccination of the population," said Hechmi Louzir, director of the Pasteur Institute in Tunis, who is a member of the country's scientific committee on the pandemic.

He told AFP that up to 60 percent of the population could be fully vaccinated by October, adding that large numbers of infections had also boosted levels of immunity.

AFP figures show that over the past week, Tunisia was vaccinating its population faster than any other African country, with 0.81 percent of the population per day receiving a jab.

More than a quarter of Tunisians are now fully inoculated.

Morocco has seen 13,800 Covid deaths in its population of around 36 million, according to AFP figures.

The kingdom is ahead of its Maghreb neighbours in inoculations, with 46.7 percent fully vaccinated.

Morocco saw a surge in infections after easing a curfew and opening its borders to travellers in June. That allowed Moroccans in European countries hard hit by the highly infectious Delta variant to return home for summer holidays.

A new surge in Covid cases in early August prompted Moroccan authorities to impose a new curfew and restrictions on movement and gatherings. By FADEL SENNA (AFP/File)

The caseload spiralled, with some 70,000 new cases over one week in early August. Authorities responded by imposing a new curfew and restrictions on movement and gatherings.

Health ministry official Abdelkrim Meziane Bellefquih said this week that infections were down for a fifth straight week. But in comments carried by the official MAP news agency, he warned that "high rates of critical cases and deaths continue to be recorded".

The country has pushed back the start of the new school year to October 1 and has launched a vaccination drive among teenagers.

With an official toll of 5,650 deaths, Algeria announced a target in September to vaccinate 70 percent of its 43.9 million population by the end of the year.

But AFP figures show that this week, barely 13 percent of the population had received a first vaccine jab, with fewer than 10 percent fully vaccinated.

The country's caseload peaked in the last week of July with over 10,000 infections, but has since plummeted.

While the first week of August saw 268 deaths, the last seven days saw 132.

Algeria relaunched international flights in June after a suspension of more than a year.

Libya closed its border with Tunisia in July following the deadly surge in cases in its northwestern neighbour but reopened it on Friday after the caseload eased. By FATHI NASRI (AFP/File)

Libya, where state institutions have been degraded by a decade of conflict, has officially recorded 4,500 Covid deaths among its seven million people.

Like its neighbours, it has reported a peak in infections followed by a sharp drop in recent weeks.

In the last week of July it recorded 24,000 new cases and 204 deaths, but the past seven days have seen just a third of that number of infections and 83 deaths.

The divided country's vaccination campaign got off to a slow start but, on August 11, a centre was opened in the capital Tripoli, with another in the country's east 10 days later -- followed by a string of smaller ones.

An AFP tally shows that just over 18 percent of Libyans have received a first jab.

But the vaccines -- China's Sinovac and Russia's Sputnik V -- have arrived in irregular batches, and just two percent of Libyans have received the full two doses.

Libyan health authorities have noted a fall in infections in the west after the border with neighbouring Tunisia was closed on July 8.

The frontier reopened on Friday with strict health measures in place to prevent another uptick in cases.