Look out for strange, suspicious characters in society - NCCE 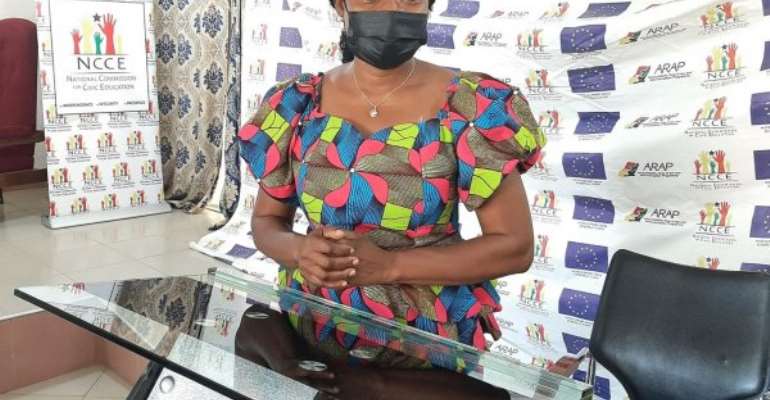 Madam Felicia Ajongbah, the Kassena-Nankana Municipal Director, National Commission for Civic Education (NCCE), in the Upper East Region, has urged residents to look out for strange and suspicious characters likely to cause violence in the society.

She said such characters should be reported to the appropriate authorities for investigation, to help fight against violent extremism.

“Sometimes strange people come into our communities and we accommodate them without finding out where they are coming from and what they plan to do in the community,” she said.

Madam Ajongbah was speaking at an engagement with stakeholders and youth activists in the Municipality to highlight the consequence of violent extremism to the peace and security of the country.

The programme was organised by the NCCE as part of the implementation of European Union (EU) sponsored project dubbed: “Preventing Electoral Violence and Providing Security to the Northern Border Regions of Ghana (NORPREVSEC).”

She said activities of violent extremists in neighbouring countries threatened the peace and stability of such countries and it was the responsibility of every Ghanaian to be concerned and contribute to preserve the country.

The Director said the broader goal of NORPREVSEC was to fight transnational organised crime while promoting respect for human rights and the rule of law.

She said the project aimed to equip the youth with relevant information on violent extremism and radicalism, and how to identify early warning signals to guard against recruitment of individuals to perpetuate violence.

“This engagement is part of our community awareness creation activities on identifying early warning signs of extremists' violence and to address the tensions being created by the activities of violent extremist groups and prevent the likelihood of democratic relapse,” Madam Ajongbah said.

She entreated the youth to be patriotic and imbibe the sense of civil responsibility and social cohesion to encourage their communities to improve their attitude on the culture of tolerance and non-violence.

She advised the youth to be ambassadors of peace to promote peaceful co-existence and shun violent extremism.

“It is a collective responsibility of every citizen to participate in the fight against violent extremism,” she added.

Mr Pontius Pilate Baba Apaabey, the Upper East Regional Director of the NCCE, cautioned the youth to be mindful of information they accessed from the internet and said terrorists could also that to recruit them into their group.

Chief Superintendent Muchiraru Yahaya, the Kassena-Nankana Municipal Police Commander, reiterated the need for the public to freely render credible information to the Police to assist them fight crime.

He said information given to the police was processed and properly investigated to ensure peace and order, adding that security was a shared responsibility.