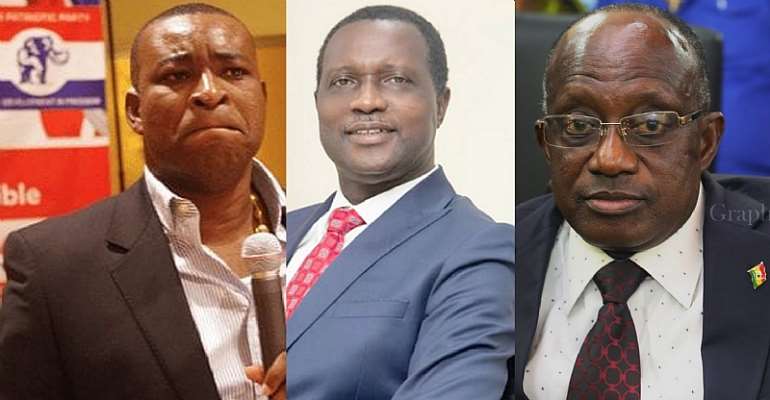 Transport operators, passengers and pedestrians were stranded for about five hours on Tuesday morning at Atonsu Aputuogya after the torrential rains.

The already bad nature of the road got worse and dangerous after the rains impeding not only vehicular flow but pedestrians from commuting from the area to other parts of Kumasi.

Some cars that attempted to drive through the gold-colour-muddy road got stuck in the slippery part and had to pray for some sunshine to enable the road get dry before they could move.

The situation got several tongues wagging in desperation as names of some known New Patriotic Party members’ received numerous insults and condemnations.

Minister of Education Dr. Yaw Osei Adutwum, Ashanti Regional Minister Simon Osei Mensah and Ashanti Regional Chairman of NPP Bernard Antwi Boasiako popularly known as Chairman Wontumi were the most mentioned by the stranded commuters who believe would have used their influence in the party to fix the bad roads.

“We have all these big men coming from this area and for five years look at our road. How can we go to work through this muddy road?

“That Wontumi is always on radio and tv bragging but look at his backyard, and they will come and tell us to vote for them again after neglecting us like this. He will come and flout his gold, cares and other properties on TV but even this small stretch of road, he can’t rehabilitate it,” a resident said angrily.

A passenger in one of the stranded vehicles said “so is Dr. Adutwum only going to talk about education and won’t care about the welfare of his constituents? What wickedness at all is this? If anybody had told me that with all these influential persons coming from this constituency, we will still be weeping about poor roads, I wouldn’t believe him.”

Kofi Job Construction limited, the company given the contract for the Atonsu-Aputuogya- Kuntenase project abandoned the site for several months for possibly lack of payment by government to finish the project.

It was actually revealed that the company has been asking for some payments from government to enable it complete the project but was unsuccessful.

The Ashanti Regional Minister was also heard pleading with management of the construction company on live radio to consider the plights of residents of the area and return to site but the contractor also ignored him.