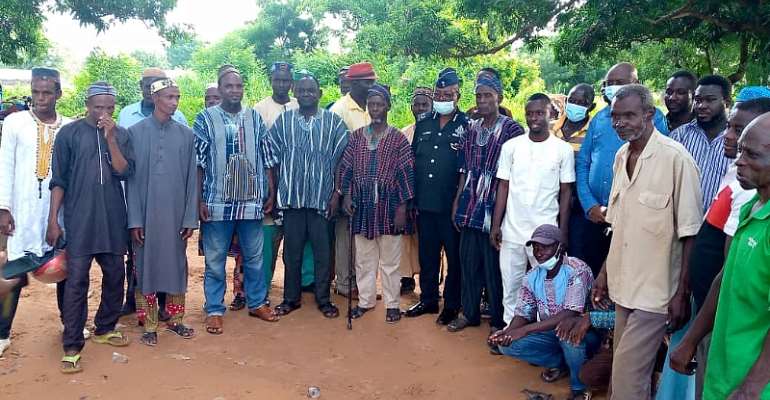 The rejuvenated Neighborhood Watchdog Committee (NWC) of the Canteen Electoral Area in Damongo in the West Gonja Municipal has been officially inaugurated by the Savannah Regional Police Command.

Under the leadership of the Assemblyman for the area working together with the chiefs and opinion leaders, the Neighborhood Watchdog Committee herein also referred to as Community Militia is to partner with the police in maintaining law and order, and combating crime in whatever forms in the community.

The inauguration was done by a team from the Savannah Regional Police Command led by the Deputy Regional Commander, DCOP Ebenezer Larbi and the Regional Crime Officer.

The 21-member Neighborhood Watchdog Committee made up of representatives from the four major zones in the electoral area were given formal training on their roles.

In a brief remark after the inauguration, DCOP Ebenezer Larbi pledged the complete support of the police in the work of the committee, whilst charging the members not to take the law into their own hands, but work closely with the police to help stop crime.

He said considering the inadequate staff strength of the police in the region, it can only be possible to effectively fight crime if the police get the maximum cooperation of the citizens.

He commended the Assemblyman and the community for the initiative, adding that, in response to the plea, three police officers will be attached to the Neighborhood Watchdog Committee to support their work.

He promised to work with the Assemblyman to mount a police barrier along the Canteen-to-Kotito road leading to Buipe to help combat the rising rate of armed robbery along that stretch.

The Regional Crime Officer also added his voice to the need for the Watchdog Committee to be professional in discharging the voluntary mandate given them by the community.

The Assemblyman for the area, Ananpansah, B Abraham assured that the Watchdog Committee will be given the needed independence and support to operate efficiently and effectively.

According to him, the work of the committee will be far removed from any interference from community political leaders and traditional authority to enable them discharge their assigned duties without fear or favour, noting that 'crime has no colourization.

Whilst commending the committee for the sacrificial work so far, he admonished them to remain steadfast in embarking on intelligent led operations to enhance security consciousness.

He encourages community participation in crime prevention and builds a strong information base to arrest perpetrators of crime in the electoral area. He pledged his full support and the support of the community for the work of the committee.

Mr. Diwura, who spoke on behalf of the chiefs expressed delight in the fact that the watchdog Committee was being revived.

He said the day was memorable and will go down the history books of Canteen to have the whole entourage of the Regional Commander of Police come to the Canteen community to educate community members on security concerns.

This he said has never happened before.

Present at the occasion were chiefs and opinion leaders from the various areas in the electoral area, religious leaders and representatives from the Fulani community.

The overjoyed community members lauded and embraced the initiative, whilst pledging their support for the work of committee.