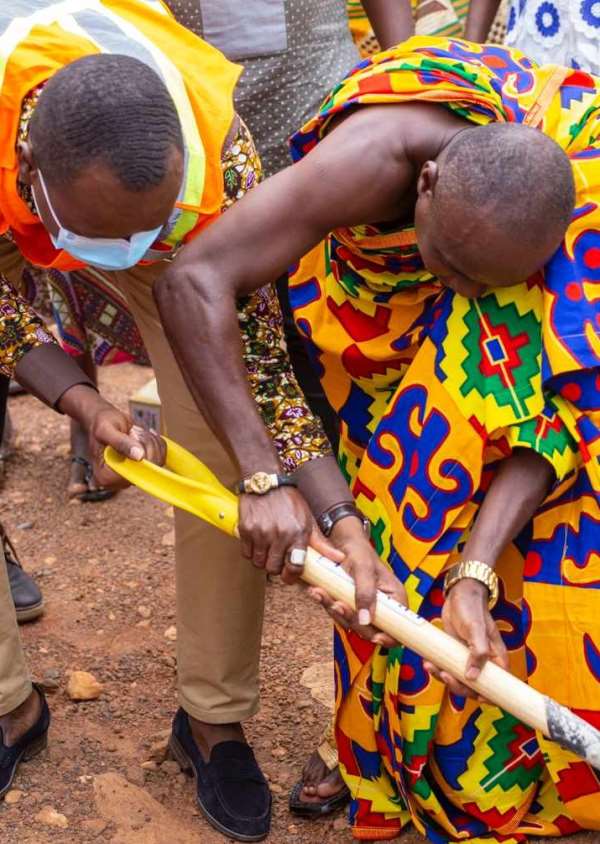 The District Chief Executive for Amansie South District, Hon Clement Opoku Gyamfi has cuts sod for the commencement of works of construction of developmental projects.

Speaking at the sod cutting ceremony, Hon Clement Opoku Gyamfi said with the lorry park project, drivers are required to stop at defined time intervals to avoid traffic congestion at Datano and its environs.

He added that the lorry park will be the safest place to park since it comes with a larger parking space, vehicle washing bay, fuelling facility and many others.

Hon DCE noted that the newly built stores will also be fixed with CCTV cameras to provide maximum security.

He indicated that the construction of stores and lorry park project which has been awarded to Kofi Acheampong 79 Enterprise will be completed in six months time.

The DCE added that the construction of 1No.2 units KG block with office, stores and 2-seater aqua-privy toilet facility at Men-Dome has been awarded to All Blessed Co. Ltd expected to be completed in six months time.

He proceeded to cut another sod for the construction of palm oil extraction at Mem.

Hon Clement Opoku Gyamfi indicated that the palm oil extraction facility would empower women in Manso Mem and the whole of Amansie South District to be self-sufficient.

According to him, the palm oil extraction project aside creating more jobs for the youth in the District will also eliminate poverty.

He stressed that the palm oil extraction facility project has been awarded to Obeline Company Limited expected to be completed soon.

"In most cases, physically challenged people beg people for food, so this project will help them earn income to cater for themselves to stop begging for alms," the DCE stated.

He added that the vocational training project has been awarded to Trinity Alive Pacesetters Company Limited expected to be completed soon.

The DCE held the last sod cutting at the District at Manso kwabenaso for the construction of a 20-seater toilet facility awarded to Habash Company Limited.

According to Hon Clement Opoku Gyamfi, some of the projects are expected to be completed by the year 2022.

He takes this opportunity to assures residents whose houses and stores have been affected by the demolition to pave way for the construction of some of the projects would be compensated.