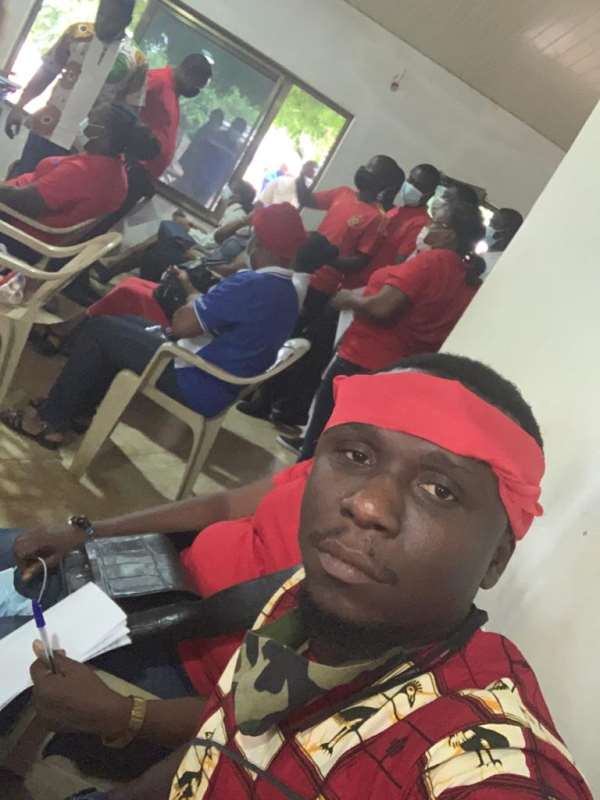 Good morning ladies and gentlemen of the press herein gathered. On behalf of my colleague teachers, I wish to welcome you all to this very important Press Conference and to also thank you all for your prompt response to our call. You cannot be wrong about coming here because this gathering addresses critical issues affecting Ghanaian teachers and education at large.

Ladies and gentlemen, there is no denying the fact that education in Ghana is incomplete without Ghanaian teachers. This is a fact that cannot be contested. But the obvious question that always begs for an answer is whether Ghanaian teachers are given that due recognition, good remuneration and the respect that they deserve. Your guess is as good as mine.

It is important for us to state that democracy without education is meaningless because it is education and enlightenment that lift a nation to the heights of progress and greatness.

As teachers, we are at the frontline of education and play a major role in shaping the values, knowledge and skills of students. We are the pillars of the nation-building process because we help influence the next generation to become morally responsible and productive members of our community.

It should also be noted that we are the country’s gatekeepers, opening doors to opportunities and possibilities that are beyond the foreseeable horizon. We trigger visions, develop building blocks and catalyze actions to build the world to come. So, therefore, we would not allow ourselves to be taken for granted any longer.

The issues that surrounded the recent promotion examination result that was written in February is still something we cannot comprehend. Why should teachers be told they have passed when they first checked but later another indication showing failure? Others were told to submit their documents for further verification but were later told they failed. We all saw the frustrations of those teachers on national television. It has become clear to us that it was just a quota system that was used in passing those who wrote the exam.

We are calling on the leadership of GNAT to, as a matter of urgency, meet with the Ministry of Education and arrange for remarking of the examination scripts and subsequent publishing of the results of teachers who were told to bring their documents to the Regional Education Offices for verification but were later told they have failed the exam. We have no doubt in our minds that our teachers have successfully passed the examination but were failed because of a shrouded quota system being used by the Ghana Education Service.

As teachers, we are worried about the continuous silence by our national leadership on this matter and we can no longer bear the frustration.

Ghana Education Service must, as a matter of urgency, exhibit competence, diligence and professionalism on issues regarding promotion exams within the service and the disgraceful manner they handled the last promotion results and the disparity in the examination. This we demand because prior to the exams, others who even qualified were not given index numbers and had to write the exams at a later date.

Secondly, as we speak the lower ranks, that's those who completed in 2015 and 2016 have equally not been put on scale after passing their promotion exams, thst's2018 and 2019 respectively.

Our colleagues whom they failed in the aptitude promotion exam, petitioned the Education Committee of Parliament of which we are aware the issues are under investigation. How come the Ghana Education Service is calling on those they claimed to have failed the exam to re-register for the exam under investigation?

TEACHERS NOT PUT ON SCALE

The teachers who passed their promotion exam written in February 2021 have since not been put on their rightful scales. When the aptitude promotional exam started last year, it took Ghana Education Service not more than two months for those teachers who passed to be put on scale. That is not the case in this year’s. Could it be that it was because last year was an election year, hence the alacrity in putting the teachers on scale?

We are calling on the Ghana Education Service to, as a matter of urgency, put us on our rightful scales and pay all outstanding arrears by the end of September. We are tired of the ugly frustrations. We need peace of mind.

The statement issued by government last year that all legacy arrears owed teachers had been cleared was just a falsehood. We still have over Sixty Three Thousand (63,000) teachers across the country owed the legacy arrears. Is it because we are not in the profession to become millionaires as indicated by the President that the government is adamant in paying our legitimate salary arrears? We are of a firm belief that given what is due us we will become billionaires and not even millionaires. We are calling on President Nana Addo, to as a matter of urgency, make sure we are paid our arrears with interest.

Majority of our colleagues who are supposed to be enjoying responsibility allowance are denied because those in affairs don’t care about them. A country that does not honour her heroes is not worth dying for.

Teachers who have genuinely qualified and are supposed to be given what is due them are having a torrid time processing their documents for the monies to be paid. What is more alarming is that the payment of arrears has been thrown to the dogs.

The Standard-Based Curriculum which was introduced almost three (3) years ago is still with challenges including:

As we speak, there is gap in the implementation of the Standard-Based Curriculum because the Junior High Schools are not implementing it as planned. Textbooks supplied to the schools have been withdrawn.

Our word of advice to Dr. Prince Armah the former NaCCA boss is that, in as much as we appreciate him for the great work done in the Standard-Based Curriculum, he should desist from making unpalatable comments to justify the delay in the supply of textbooks to primary schools.

As teachers, we are committed to seeing our students become great men and women in future and as such all the necessary materials needed to aid understanding among our learners should be provided by government.

Ghanaian teachers were paid a lump sum of 1,200 Ghana Cedis as professional development allowance in November 2020. The position of government was that, this allowance will be paid to teachers on monthly basis. Unfortunately, this has not been the case. Teachers have not been paid the allowance from January, 2021 till date. We are however, calling on government to keep to the promise made in order to forestall future unrest because we are struggling to pay for workshops.

We demand the payment of the following allowances by government as other sectors are enjoying.

Allowance for form masters at the JHS and for Class teachers at the primary school.

Allowance for teachers in deprived communities.

There are discriminations and discrepancies in the payment of retirement benefits to teachers in recent times as compared to what happened in the past. If this is not a poor way of treating retirees, then we do not really know how to term it. Our retirees are worse off in recent times and no one seems to care. SSNIT is now killing retiree teachers slowly.

Ladies and gentlemen, we are hopeful that if all these issues are addressed within the shortest time, teachers would have the peace of mind to discharge their duties to the best of their abilities.

As we bring this press conference to an end, we must say that we are highly disappointed in Madam Philippa Larson's leadership as our national president. For Mr.Thomas Musah, our General Secretary, he started so well but now in a hibernating mood and must wake up before we call for his removal from post.

To those who are planning to contest in national positions in the Union, they should advise themselves if they know they are not ready to serve the interest of teachers when voted for, because we will come after them with a great force.

We are concluding with the message by Guy Kawasaki, “If you have to put someone on a pedestal, put teachers. They are the society’s heroes”

Once again, we thank you all for coming!

‘You can’t beat NDC in spreading lies, falsehood and propaga...
36 minutes ago