Cement to hit GH¢60 a bag if taxes, levies are not reviewed — Manufacturers 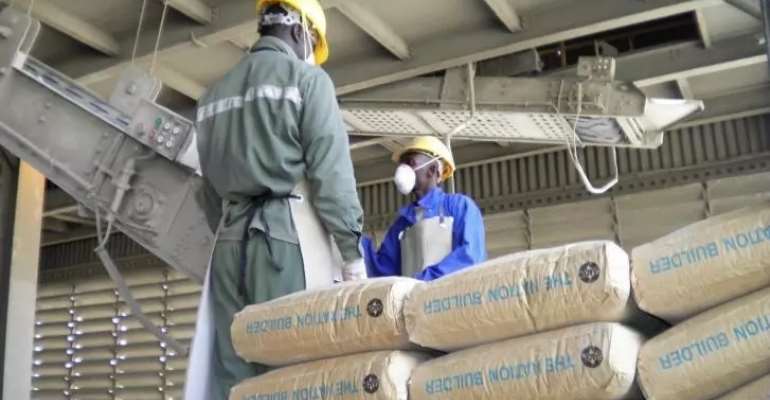 The price for a bag of cement is likely to continue its ascendency and hit GH¢60 by end of the year if urgent steps are not taken to review, suspend or scrap some taxes and levies which affect the production cost build-up, cement manufacturers have said.

The manufacturers say they are in dire circumstances and have been forced to sacrifice their returns and plough back to stay in business – a situation that is gradually reaching a tipping point.

Per industry data, over the past seven months, the retail price of cement has gone up three times – resulting in a GH¢10 to GH¢12 or roughly 27 percent increase and pushing retail prices to about GH¢50; a situation that has been described as unprecedented.

The manufactures say they have had to absorb a lot of the cost to keep prices at the current rate; but if government does not roll out measures to help mitigate the cost build-up, they will have no option other than to allow the price to take its natural course – a development that would be dire not only for them but also the economy.

“Cement is a strategic economic asset that has national security implications, and therefore should not be allowed to behave as it is behaving. Government must intervene, and we have presented papers to some ministries to do something urgently,” Executive Secretary of the Chamber of Cement Manufacturers Ghana (COCMAG), Dr. George Dawson-Ahmoah, told the B&FT in an interview.

Just like many other sectors of the economy, the advent of COVID-19 brought its dim light to the cement industry globally.

Cement is a mixture of Clinker, Gypsum and Filler (Limestone). Clinker constitutes 80 percent of the cement whereas Gypsum is 5 percent and Limestone (or other constituents) 15 percent. Clinker and Gypsum are imported. Availability of the main raw material for the manufacturing of cement, clinker, became a serious cause of worry. The rise of raw material prices during the last 12 months has been a big challenge for the cement industry.

In addition, the scarcity of vessels or empty containers to transport goods globally has greatly influenced freight cost – which has in turn increased the cost manufacturers pay for importing clinker to feed their plants locally. Indeed, clinker price (Clinker + Freight) increased by 55 percent during the first half of 2021 and could even reach 98 percent soon, data from the Chamber of Cement Manufacturers show.

Delays at the port are said to be among the major challenges cement manufacturers are facing. Any importer has contractual terms to respect, otherwise he will pay penalties. For cement manufacturers, each day the vessel is delayed at anchorage or at the port generates a penalty of US$35-45,000… which used to US$15,000 a day in demurrage before 2020.

Today, the vessels are waiting 10 days on average to offload the clinker against 1 or 2 days in previous years. And the fact is that this penalty must be paid in foreign currency to the foreign ship owners.

This development worsened in April 2021 due to congestion of the bulk terminals/berths and the exclusion by Ghana Ports and Harbours Authority (GPHA) of the cement manufacturers from using berths 1 and 2. Many petitions and discussions have been initiated by the Chamber of Cement Manufacturers, but they are still under study by GPHA.

Another worry for the Chamber is the payment of fumigation levy for imported clinker. The Chamber says it is at a loss why a fumigation levy should be slapped on clinker, the raw material that will be fed into a plant and processed to become cement under high international standards. They, therefore, want the levy scrapped to help reduce the cost build-up on the product.

They are also asking government to take a second look at the payment of import duties on importation of a raw material that will be processed into a finished product for the market, and on which VAT will be paid. They want the duties either waived for a period or amended to give the sector some respite.

They believe a positive outcome of the above will help stabilise or reduce the price of cement.

With the Ministries of Trade and Industry and the Ministry of Transport, the Chamber of Cement Manufacturers (COCMAG) has tried to find solutions for containing these impacts, and very productive meetings have been held with many ideas proposed. The Ghana Shippers’ Authority and GPHA are also being continually engaged.

Executive Secretary of the COCMAG, Dr. George Dawson-Ahmoah said: “However, many challenges are facing the executives to translate the proposals into effective actions. In this regard, the Chamber is still pleading for urgent action from GPHA to avoid an additional increase in cement prices”.

Police smoke out Shatta Wale, handcuff him for faking gun at...
44 minutes ago