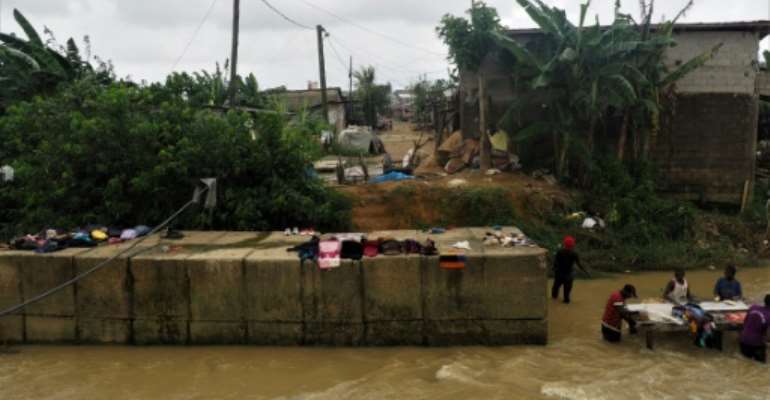 Floods are more frequent in a poor Douala neighbourhood where residents dried their belongings next to the river that flooded days earlier. By Adrien MAROTTE (AFP)

It is the middle of the night in Cameroon's largest port city, Douala, and the floodwaters are rising fast and quietly.

Flooding is an annual hazard during the July-September rainy season in Makepe-Missoke, a poor district in the heart of this city of more than three million people.

But, impelled by suspected climate change and worsened by urban planning and blocked drains, such events have become more and more frequent.

"The TV burned out, the refrigerator burned out," Tsafack, 35, sighed after the most recent flood earlier this month. "Everything has been trashed."

"As soon as we hear thunder, we raise the beds," his neighbour Francois, a man in his fifties, said. "Everyone here is scared. The water rises so fast."

The two men have stark memories of a flood in summer 2020 that devastated the neighbourhood and paralysed Cameroon's economic capital on the Atlantic coast.

Hummel Tsafack says the most recent flood a week ago was worse than the one in July. By Adrien MAROTTE (AFP)

Francois's small home is steeped in damp and none of his household appliances work. The concrete floor has holes in numerous places.

"We have already patched that area seven times. Every time there's a flood, it breaks up and we have to start again," he said.

"We moved here because it was cheaper. We aren't going to move again," Francois said, though the endangered neighbourhood is located in a flood zone where building is officially banned. People continue to settle there, driven by the lack of space in a city with a population growth rate of more than 5.5 percent per year.

The gap is widening between demand and supply for available land as nearly 110,000 newcomers per year look to put down roots in Douala.

Even before climate change, Doula was already prone to rising water.

The region has almost 250 kilometres (155 miles) of inland waterways and abundant tropical rainfall which averages around 4,000 millimetres (157 inches) per year.

The city lies at the mouth of the Wouri River, on a low coastal plateau, and is influenced by the tides of the Atlantic Ocean.

Meteorological data for the past 20 years record a decrease in precipitation, but the overall decline masks an increase in extreme weather events such intense rainfall.

The latest report from the UN's Intergovernmental Panel on Climate Change (IPCC) says that coastal cities are on the front line of the climate crisis, threatened by rising sea levels and storm surges.

Floods will displace millions of Africans in the coming decades, and by 2050 inflict costs of up to $60 billion (51 billion euros) per year in the 136 largest coastal cities, it predicts.

But part of the impact from flooding also comes from environmental management.

The banks of the river in Makepe-Missoke are littered with plastic waste.

"Look at all the rubbish that the people here have thrown away," said environment specialist Didier Yimkwa.

"Add to this the silt and the spread of invasive plants which build up the river bed. When there's heavy rain, the water overflows," he said.

To tackle the problem, the city has built around 40 kilometres (25 miles) of drains since 2012 and improved basic services in some neighbourhoods, such as waste collection.

But trash is strewn everywhere in poor districts of Douala and the drains are often clogged with plastic, preventing them from doing their job.

"Thirty percent of waste is estimated to end up in the wild," Joseph Magloire Olinga, Douala's deputy director of research and environmental protection, told AFP.

"We need a serious change in land use when it comes to providing homes for people," Olinga said.

"This means having a denser city centre and building high-rise dwellings -- but in some areas, property developers have bought up the land and don't want to sell it."

The authorities are still allocating flood-prone areas to construction projects.

Residents struggle with daily chores as floods become more frequent in the port city of Douala. By Adrien MAROTTE (AFP)

"In neighbourhoods like Makepe-Missoke, the goal is to strengthen resilience -- to live with the risk of flooding while also minimising it," Olinga said.

"But what's sure is that it will also be necessary to get some inhabitants to move because of the threat."

Hottest Photo Reports
Catch up with all the political quotes from our politicians.
Advertise here
More Cameroon
ModernGhana Links
How the water crisis in one town in english speaking Cameroon is hitting students and the poor
Four separatists sentenced to die in troubled Cameroon
Priest abducted in anglophone Cameroon is freed
Road-trip surgeon brings hope of health to rural Cameroon
Hosting Cup of Nations 'irreversible achievement' for Cameroon
Cup of Nations 'beacon of hope' for battered Cameroon economy
12 dead as fishermen, herders clash in Cameroon
Betting on a future 'Made in Cameroon'
Both sides in Cameroon conflict must protect civilians, says HRW
TOP STORIES