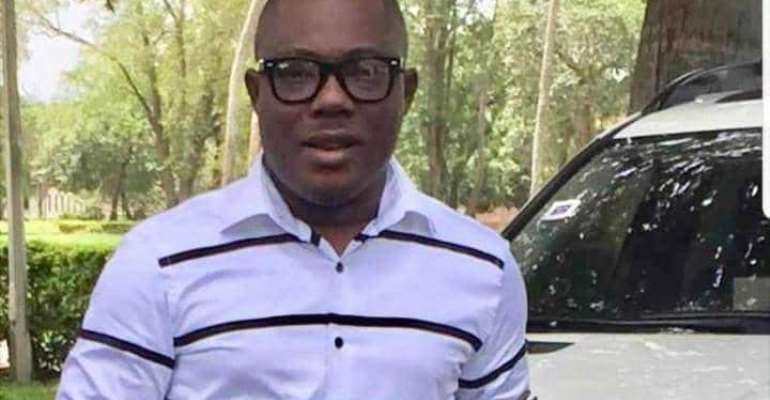 UTAG has been on strike for about weeks demanding for the implementation of a 2012 Single Spine package which put entry-level lecturers on a salary of $2,084 among others.

Several weeks of being on strike and refusal to call off, which landed in court, the teachers finally had agreed to return to the negotiation table by signing a Memorandum of Understanding (MoU) with Government to suspend the strike action.

In order to affirm the stand of UTAG and giving insight to what transpired behind the scenes, Prof. Gyampo in a social media post lauded the Vice President and the Education Minister for the level of maturity exhibited to calm nerves.

He stated that “Thankfully level headed leaders like the Vice President and the Minister of Education were humane enough in empathizing with our poor conditions of service and demonstrated palpable commitment towards bringing a finality to the impasse.”

2. The National Labor Commission, clearly a very moribund and incompetent body, had simply no clue in dealing with our challenges as an independent arbiter. They could not call successive governments to order, for failing to meet their own agreements to us. But they could cheaply fathom the idea of using the courts to intimidate those who teach the laws interpreted by the courts.

3. Well, we are happy we ignored, disregarded and refused to be intimidated by their attempt to intimidate us. We also went to court to challenge their interlocutory injunction and the matter was about being heard. We weren't fined, as court fines bothers on guilt and criminality. Certain processes had not been fully filed at the time our case to set aside the flawed NLC interlocutory injunction was about to be heard. Typical of a bias arbiter, the NLC raised issues with our filing processes and asked the judge to award a cost of 10,000 cedis against us for wasting time. The judge however awarded a cost of 3000 cedis, which we could easily pay, in spite of our pour conditions of service.

4. Our substantive matter challenging the NLC's interlocutory injunction was expected to be heard on Thursday 19th August 2021. We were going to appeal against any unfavorable ruling up to the Supreme Court and even there, seek a review of their decision, if it had been unfavorable. But we were at the same time, not happy about the potential close down of the public universities and the attendant disruption of our academic calendars. Thankfully level headed leaders like the Vice President and the Minister of Education were humane enough in empathizing with our poor conditions of service and demonstrated palpable commitment towards bringing a finality to the impasse.

5. They met with us and this culminated in the signing of an MoU, which inter alia, states that the NLC must discontinue its suit against us, whiles we take steps to SUSPEND (not called off) our industrial action, get back to the negotiation table and within one month, agree on something for ourselves. Our industrial action, has been fruitful to the extent that, it has given us the needed attention and forced officialdom to a one month negotiation time-frame, within which all the issues are expected to be addressed.

6. It must be reiterated that, UTAG has not called off its strike, as no demand has been met yet. The strike, as per the MoU, has only been suspended, pending the outcome of the one month negotiation period. The line of demarcation between “a called off strike” and “a suspended strike” must be clearly articulated and caution must be sounded that, a more deadly industrial action, that elicit massive support from all labor unions in Ghana, and makes the country ungovernable, would be proposed, and organized to bring equity and social equilibrium, should University Teachers feel deceived, cheated or lied to, after the one month negotiation period. We would keenly monitor the negotiations. We won't fight government. and we won't team up with the opposition. But we would ensure that UTAG is no longer taken for granted from now onwards.

7. Special commendations must go to His Excellency, the President of Ghana, who I am told, was very upset about how we were being treated; the Vice President for his intervening efforts behind the scenes; the Education Minister, who from now onwards must be referred to as the MASTER LEADER for his civility and calming down language; the Deputy minister for Employment; and the entire student body for their unflinching support for us. The only state institution that malfunctioned, is the NLC. Its incompetence would remain a monumental embarrassment to governments, if efforts aren't made to change its leadership. Not all positions of state, must be occupied by party apparatchiks, and if for some reason, a party loyalist must be appointed, care must be taken to ensure that such a person can actually lead in times of crisis. The current NLC has outlived its usefulness as an independent arbiter, in dealing with labor crisis, and the earlier something is done about the Commission, the better for all of us.

8. UTAG will take the steps to SUSPEND (not call off) it's strike for now, as a sign of empathy for our students, and respect for all agreements reached, culminating in the signing of the MoU. The actual calling off of our strike, is contingent on the outcome of the one month negotiation period, and we all pray that it is good, and gets counted as one of the great legacies of President Akufo Addo.

9. Let me counsel government to begin to rethink the discrimination imposed by article 71 of the 1992 Constitution that grants juicy conditions of service to a few people, with relatively low educational background, and ignores all other Public Servants who are given pittance every month, and whose deaths are hastened every year, for poor pension they receive on retirement. For, politicians and all other article 71 Office Holders would from now onwards, know no peace, so long as they continue to enjoy fat salaries whiles the rest of the population wallow in poverty. They cannot continue to tell us to tighten our belts, whiles they eat good food to protrude their tummies and loosen their belts. If there is no money, we must all suffer. If there is money, it must be equitably distributed. This is one key way to consolidate our peace and stability for development.