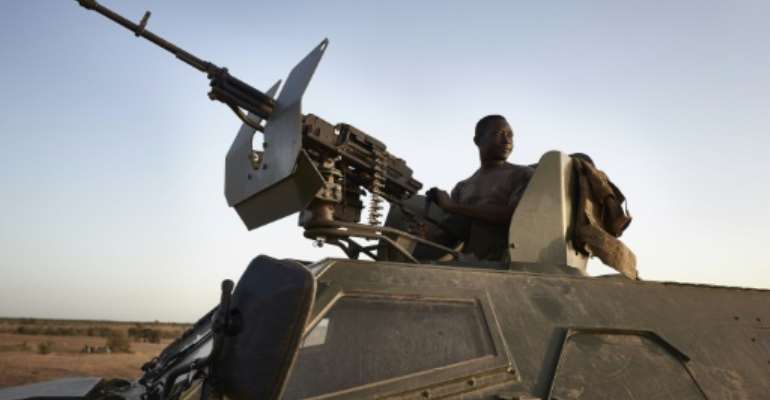 Burkina Faso troops are among those struggling to combat jihadists in the three-border region. By MICHELE CATTANI (AFP)

The central Sahel's "three-border" region, where 37 villagers were massacred by suspected jihadists on Monday, is a huge territory straddling the frontiers of Niger, Mali and Burkina Faso that has long been troubled by land feuds, trafficking, desertification and fragile state presence.

In the latest attack, gunmen on motorbikes on Monday attacked people tending their fields in the western Niger village of Darey-Daye. Four women and 13 children were among the 37 people killed.

What is the territory?

A loosely defined region rather than an official administrative area, the tri-borders includes the northern Burkina Faso provinces of Soum and Oudalan, the western Niger region of Tillaberi and Mali's Gourma area.

The territory, traditionally also known as Liptako-Gourma, encompasses some of the world's poorest regions, and they are also among the most marginalised in countries with highly centralised governments.

Local communities are mostly sedentary farmers or pastoral nomads who move their herds with the seasons.

As elsewhere in the Sahel, the birthrate here is high and climate change has sharpened competition over scarce resources, often fuelling tensions between communities.

Militants linked to Al-Qaeda emerged in northern Mali in 2012, prompting French military intervention. After being scattered, the jihadists regrouped and spread to neighbouring countries.

One jihadist chief, Adnan Abou Walid al-Sahraoui, split and pledged allegiance to the Islamic State (IS) group in 2015.

The tri-border area, here seen in Mali's Gourma region, is vast and difficult to control. By DaphnÃ© BENOIT (AFP)

He moved with his group, the Islamic State in the Great Sahara or ISGS, to the tri-border region where he began recruiting and building up financing.

Most attacks in the region are now suspected to be carried out by the ISGS, according to the ACLED monitoring group, which collects data for analysis on conflicts.

From the end of 2019 to early 2020, jihadists hit a string of isolated military camps with a tried-and tested tactic: Lightning attacks carried out by militants on motorbikes that left hundreds of soldiers dead.

From January 2020, the French anti-jihadist mission in the Sahel, Operation Barkhane, began to focus its military efforts on the three-border area especially against the ISGS.

Early this year, French President Emmanuel Macron declared that IS had "lost its grip" in the sector and questioned its ability to carry out further large-scale attacks.

He later announced that Barkhane would be phased out, and the French military presence in the Sahel, currently numbering 5,100 troops, would be scaled back to 2,500-3,000 men.

Military forces in the Sahel. By (AFP)

On the Malian side of the tri-border area, the rival groups linked to Al-Qaeda and IS fought for control over the Gourma region. The pro-Qaeda group became ascendant.

In early 2021, a Chadian battalion of 1,200 soldiers from the G5 Sahel -- a joint force gathering Burkina Faso, Chad, Mali, Mauritania and Niger -- was deployed to the territory to help other under-equipped local forces.

A short while later, on March 15, 33 Malian soldiers were killed in an attack by jihadists on motorbikes and pickup trucks near the border with Burkina Faso and Niger. IS claimed responsibility for the operation.

The jihadist presence feeds on long-standing tensions among local ethnic communities, some of which have formed armed self-defence vigilante groups, further heightening risks of violence.

Hundreds of thousands of people in the Sahel have been displaced by jihadist violence. By OLYMPIA DE MAISMONT (AFP)

Jihadists play on these old hostilities, recruiting from local communities, offering protection from reprisals and taking control of resources and finances.

Civilians, caught in the middle, are often forced to choose between staying and fleeing -- and many of them had already taken refuge in the region years earlier because of fighting.

Those who remain find themselves at risk not only from jihadists but also from bandits and cattle rustlers.

Distinguishing intercommunal violence from jihadism and banditry has become increasingly complex. Civilians have also been the target of abuses attributed to national armies.