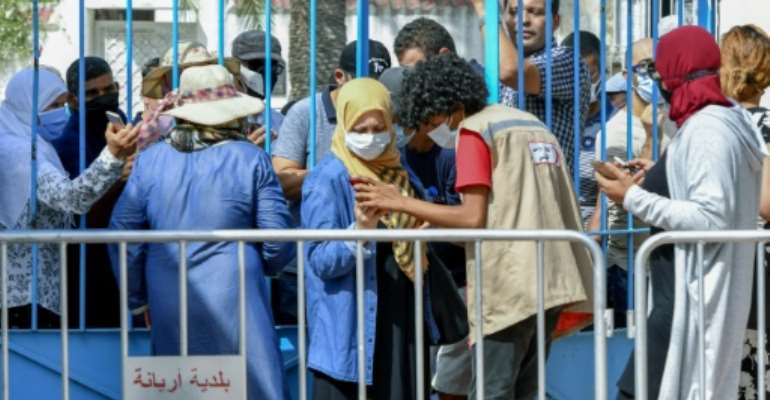 Tunisians wait for their turn to receive a Covid-19 veccine at an inoculation centre in Ariana governorate near the capital Tunis. By FETHI BELAID (AFP)

Tunisia on Sunday launched a Covid-19 vaccination drive for the over-40s, after receiving more than six million doses from abroad to combat surging infections.

The health ministry said 551,008 people had been given jabs in more than 300 centres across the country, in what was billed as an "open day" for vaccinations.

Tunisia, in the thick of political and economic crises, has received more than six million doses from Western and Arab countries, and the same number of additional vaccines are on the way, President Kais Saied said on Thursday.

Saied, who last month dismissed the government -- in part due to its alleged bungling of the Covid crisis -- and suspended parliament, has announced the establishment of a coronavirus crisis unit supervised by a high-level military official.

Tunisian authorities are aiming to get at least one jab into the arms of half the country's 12 million people by mid-October.

A first "open day" of inoculations held in July was abandoned when the vaccination centres were overwhelmed by high demand and lack of organisation.

The World Health Organization said last week that Tunisia, which has the world's worst officially declared Covid-19 death toll, may be over the peak of the latest wave but the government must still speed up inoculations.

"The epidemiological data are going in the right direction," the WHO representative in Tunisia, Yves Souteyrand, told a press conference.

The Delta variant is responsible for "more than 90 percent" of cases in Tunisia, which on Sunday registered 2,546 new cases, raising infections to a total of 610,660 with almost 21,000 deaths.