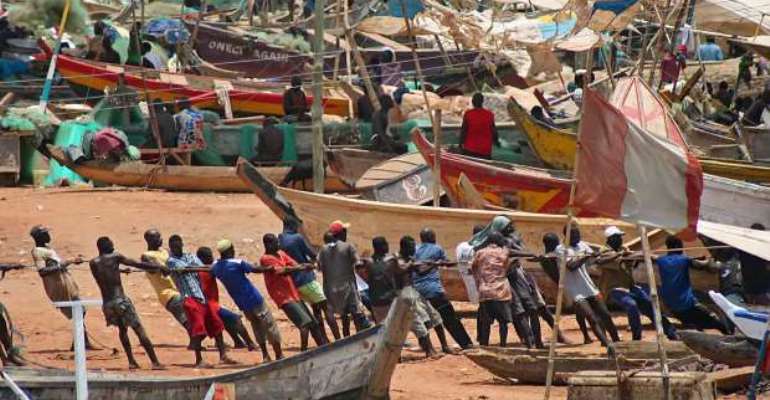 Leaders of the fisherfolk in Elmina in the Central Region are expected to meet the Minister for Fisheries and Aquaculture Development, Mavis Hawa Koomson on Tuesday, August 3, 2021.

This follows a punishment meted out to them by the minister.

Hawa Koomson over the weekend extended by a month, the closed fishing season for fishermen at Elmina, and also denied them premix fuel as punishment for their unwillingness to renounce light fishing.

Some of the aggrieved fishermen have said, they fear criminal activities may rise in coastal towns as a result of the extended ban on fishing activities.

They had claimed that since the introduction of pair trawling on Ghanaian waters, they are unable to get enough fish without the use of light.

But the Fisheries Minister indicated that the restrictions will be lifted when there are indications of compliance on the part of the fisherfolk.

In an interview with Citi News, the Executive Director for the Fisheries Commission, Michael Arthur Dadzie noted that the fisherfolk in Elmina had apologised for their action and he believes they will be pardoned after the meeting.

“The leadership of the fishers in Elmina will meet us [today, Tuesday]. Going forward, we will see what we will do, but I strongly believe that the Minster has tender care. One of the fishers was delegated to come to Sekondi to render an unqualified apology, and the Minister said she has accepted it in good faith.”

Speaking to Citi News, Mr. Ammah Fio disagreed with the decision , saying the minister should act on the existing laws in such situations.

”If you make it punishable, it defeats the purpose. Secondly, the law clearly defines the punishment for every offence. If people are using light for fishing, there are clear provisions in the law that prescribe which punishment to give. I don't think it is right that other fishermen who may be doing things right will be affected,” he noted.