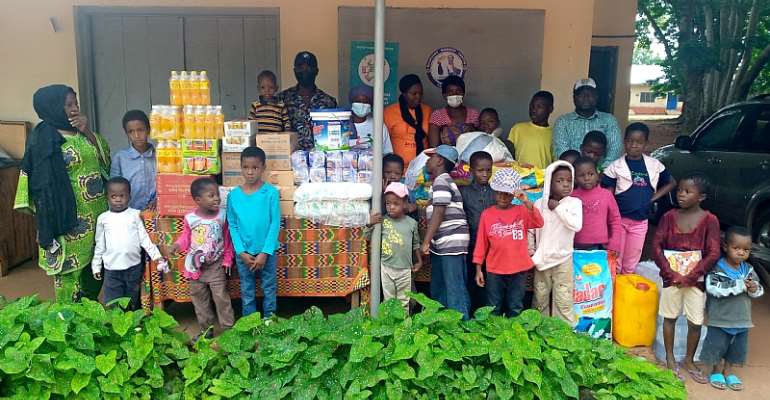 Management of Aristocrat Charity Foundation (ACF), a charitable organisation based in Kumasi, Ghana has donated items to the Tamale Children’s Home at Nyohini, a suburb of Tamale in the Northern Region over the weekend.

The donation was done in collaboration with Voix of Ghana Media ( voixofgh.com ), koomigh.com , wondafox.com and Ashanti Curls & Lumber Products.

Donating the items to the charity home, the President (CEO) of Aristocrat Charity Foundation, Mr. Asare Solomon Aristocrat popularly known as Aristocrat, indicated that his organisation has always been very sensitive to the plight of the vulnerable and underprivileged in society especially women and children.

Mr. Asare said his organization with the support from some family and friends decided to support the charity home on humanitarian grounds and to demonstrate their commitment to supporting and protecting the most disadvantaged groups and individuals such as orphans in our society.

Mr. Asare Solomon Aristocrat disclosed that, he developed the passion of giving back to humanity some ten years ago and has since not looked back.

“Our coming here today is to fulfil the very obligation that we have committed ourselves to over the years, thus, to donate the very little we are able to afford to the less privileged ones such as these our lovely kids with the hope that it would be beneficial to them and this very charity home as a whole”, he said.

According to him, this is not the first time that his outfit is reaching out to the needy. He said the foundation has supported a number of orphanages on annual basis with assorted items as well as undertaken series of charitable projects within some selected regions since its establishment some three years ago.

He sited King Jesus Orphanage at Tepa and many others as beneficiaries of his foundation philanthropic gestures.