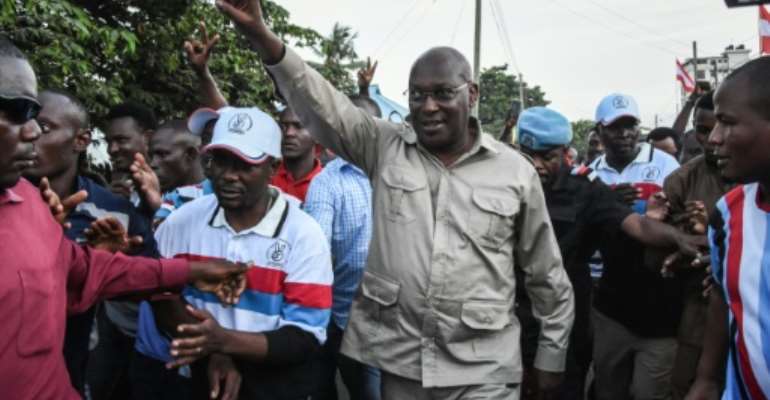 Mbowe, waving, was detained with 15 other party members in a late-night crackdown last week. By Ericky BONIPHACE (AFP/File)

Tanzania's main opposition party accused the government on Tuesday of fabricating terrorism charges against its leader, whose detention has dampened hopes of a democratic revival under the country's new president.

Chadema chairman Freeman Mbowe was charged on Monday with terrorism offences in a Dar es Salaam court without his family or legal representatives present, the party said.

State prosecutor Ester Martin said Mbowe had been charged with terrorism financing and conspiracy -- crimes of "economic sabotage" that do not allow for bail under Tanzanian law.

Tundu Lissu, who was Chadema's candidate in the 2020 presidential election, described the charges as "bogus".

"A government that uses criminal 'lawfare' against its democratic opposition deserves no support from the international community," he posted on Twitter on Tuesday.

Mbowe, 59, was arrested last week along with other party members in the Lake Victoria port city of Mwanza ahead of a planned public meeting to demand constitutional reform.

Critics said the police swoop, conducted in the middle of the night, bore the hallmarks of the oppressive rule of Tanzania's late leader John Magufuli.

Mbowe was transferred to a prison in Tanzania's financial capital Dar es Salaam where police said he was being held "for plotting terrorism acts including to kill government leaders."

Laptops and other devices were seized during a search of his home in the city.

State prosecutors, however, said the terror charges did not relate to his planned activities in Mwanza but alleged offences that occurred last year in a different part of Tanzania.

"Mbowe knew that he was being investigated for terrorism, and he left to Mwanza after knowing that he would be arrested," police spokesman David Misime said Monday.

Chadema said Mbowe's family and lawyers were told he was being transferred to hospital for health checks but was instead "taken to the court quietly" and charged without any of his legal representatives present.

His daughter Nicole Mbowe, 24, said she had visited him at the police station on Monday and that he was complaining of back pain.

"Before his arrest he was under treatment over his spinal cord," she told AFP. "I think the back pain increased due to sleeping on the floor without even a mattress."

The charges come four months after Tanzania's first woman President Samia Suluhu Hassan took office following the sudden death in March of Magufuli, under whose autocratic rule such clampdowns on the opposition were frequent.

Hassan had reached out to the opposition and vowed to defend democracy and basic freedoms, spurring optimism that Tanzania would be steered away from Magufuli's heavy-handed and uncompromising style.

But the roundup of key Chadema figures was held up by rights groups and opposition activists as evidence the administration's intolerance of dissent still prevailed, and little had changed under the new leadership.

Lissu described Hassan's administration as a "dictatorship" and urged Tanzania's foreign partners to condemn its leaders.

"Any support to a dictatorship enables it to continue its oppression," he tweeted.

The United States last week expressed concern over Mbowe's arrest and urged Hassan to ensure freedoms for all Tanzanians.

Mbowe's case is due next in court on August 5, according to prosecutors.