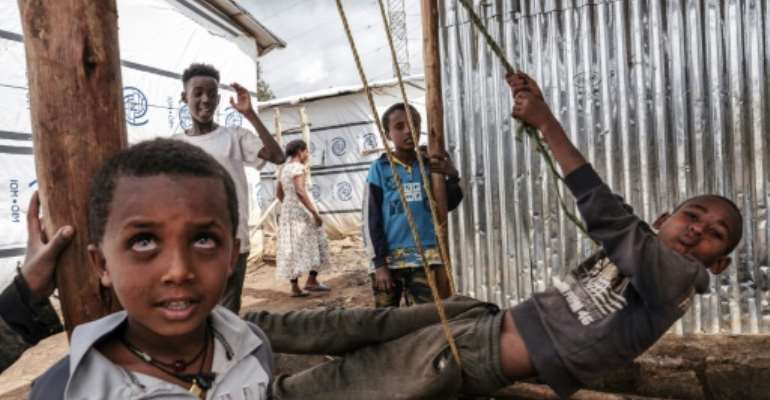 The Mai Aini camp hosts Ethiopians as well as Eritrean refugees uprooted by the ongoing war in the Tigray region. By EDUARDO SOTERAS (AFP)

Simon Fikadu awoke before dawn to join the convoy leaving the Mai Aini camp for Eritrean refugees in Ethiopia's war-hit Tigray region, where he and his family have lived for seven years.

It was a Tuesday morning in mid-July, and officials had arranged to drive Simon and 19 other refugees more than 100 kilometres (60 miles) south to visit the proposed site for a new camp -- one they hoped would be safe from persistent, unpredictable fighting.

The cars pulled away just as Simon heard the first volleys of gunfire that would soon encircle Mai Aini, including the mud-brick home where his wife and three children were still asleep.

Over the next few hours, he would field dozens of frantic calls from his wife and other loved ones who cried out in horror as bullets and artillery fire rained down around them.

The July 13 clashes at Mai Aini were just the latest example of how the Tigray war has upended life for many thousands of Eritrean refugees, who for more than two decades had come to see the region as a sanctuary from their oppressive homeland.

From the outset Eritrean refugees were caught in the crossfire: Two camps in northern Tigray, Hitsats and Shimelba, were looted and then completely destroyed in what one aid group called a "rampage".

Thousands of their inhabitants remain unaccounted for.

A camp for displaced people in Azezo, Ethiopia, hosts Ethiopians as well as Eritrean refugees uprooted by the ongoing war in Tigray. By EDUARDO SOTERAS (AFP)

Now Eritrean refugees fear they will come under fresh attack from resurgent rebels, and they are desperate to leave Tigray once and for all.

"I'm in a state of shock. Please try to understand my emotion," Simon, his phone still buzzing with calls from Mai Aini, told UN officials as he toured the new campsite located in Dabat in the Amhara region neighbouring Tigray.

Speaking in broken English, he begged for a mass evacuation of the two camps that remain in Tigray, adding: "Please try to be not only as a staff member. Please try to be a human."

Eritrean refugees began arriving in Tigray in 2000, towards the end of a ruinous two-year border war between Eritrea and Ethiopia that left tens of thousands of people dead.

Eritrean refugee Seble Melkamu (left) cuddles her son as she talks with other refugees in her shelter at a camp in the town of Azezo. By EDUARDO SOTERAS (AFP)

They were fleeing the authoritarian rule of President Isaias Afwerki, whose abysmal rights record and system of forced military service have led some to dub Eritrea "Africa's North Korea".

Yet Isaias and the TPLF remained bitter enemies, with the result that Eritrean refugees continued to feel at home in Tigray.

The region "was good for all of us," said Abdela Ibrahim, a former resident of the Shimelba camp who now lives in a camp for displaced people on the outskirts of Gondar, south of Tigray in the Amhara region.

But that changed when Abiy sent troops into Tigray last November to topple the TPLF, a move he said came in response to TPLF attacks on federal army camps.

"The adults would give you water to drink, while the youths, forsaking their previous stance, would quarrel with you, would harm you, would kill you with whatever objects they had."

Internally displaced people stand at the entrance of a shelter at the Azezo camp. By EDUARDO SOTERAS (AFP)

Eventually Eritrean forces assumed control of Hitsats and Shimelba and forced those remaining in the camps to evacuate, the refugees said.

Many embarked on days-long treks to safety through an active conflict zone, often with nothing to eat but moringa leaves.

Before the war there were 92,000 Eritrean refugees living in Tigray, including 19,200 in Hitsats and Shimelba, according to Ethiopia's Agency for Refugees and Returnees Affairs (ARRA).

More than 5,000 of those fleeing the destroyed camps ended up in Mai Aini and a neighbouring facility, Adi Harush, though they have never felt at ease there, said ARRA boss Tesfahun Gobezay.

Many fear being associated with Eritrean soldiers, who have been implicated in the mass rape of Tigrayan civilians and massacres that have killed hundreds.

"They were saying they were getting targeted because they were seen as Eritrean," Tesfahun told AFP.

"There was a growing mistrust between the Eritrean refugees and the host communities. That's the reason for their fear."

Refugees have been caught in the crossfire in the Tigray conflict. By EDUARDO SOTERAS (AFP)

The violence that kicked off July 13 in Mai Aini has no doubt heightened those anxieties.

It began after the rebels, fresh from retaking the Tigrayan capital Mekele in late June, launched a new offensive to reclaim disputed territory in southern and western Tigray, where Mai Aini and Adi Harush are located.

ARRA also accused the TPLF of deploying heavy artillery in Mai Aini and Adi Harush, looting vehicles and warehouses and preventing refugees from leaving -- creating what is "tantamount to a hostage situation".

"We have no problem with Eritrean refugees, and we'll extend whatever protection we can," he said.

'We'll sleep in the mud'

Despite such assurances, refugees are singularly focused on getting out of Tigray.

"Eritreans are being massacred and killed by stones in Tigray and around Shire (town)," Solomon Tesfamariam said, echoing an unverified claim made by several refugees.

"So, from now on, I believe Tigray is not a comfortable place for us Eritreans."

In light of the latest violence, officials are expediting the relocation of refugees out of southern Tigray to a 90-hectare (225-acre) site in Dabat.

A young boy takes a mattress handed out by an aid group at the Azezo camp. By EDUARDO SOTERAS (AFP)

Priority is being given to those who fled Hitsats and Shimelba, followed by "those who have the biggest fears", Tesfahun said.

When AFP visited the site in mid-July, it was little more than a muddy, open expanse surrounded by wheat fields and grazing areas.

But refugees like Solomon stressed they wanted to come right away, even if facilities weren't ready.

"The shelter and everything is for tomorrow. Now lives have to be saved," Solomon said.

"We will sleep in the mud if we have to."