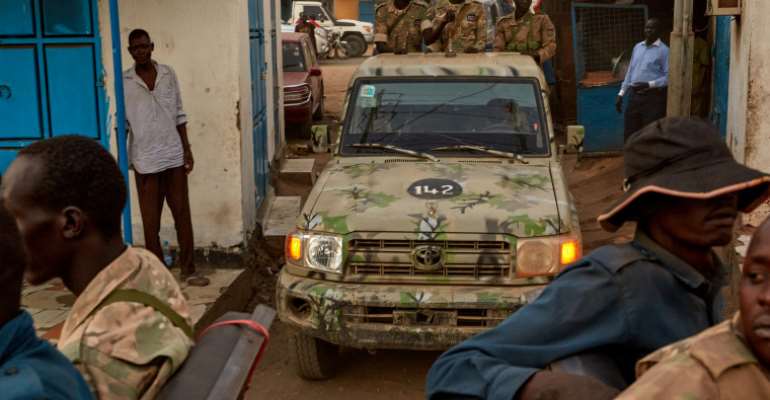 Security forces are seen in Juba, South Sudan, on April 9, 2020. Authorities recently detained journalist Alfred Angasi and have held him for weeks without charge. (AFP/Alex McBride)

On July 5, intelligence officials in Juba, the capital, arrested Angasi, a radio presenter at the state-owned South Sudan Broadcasting Corporation (SSBC), according to his sister Cecelia Dominic, who spoke to CPJ via messaging app.

Dominic told CPJ she and other members of the journalist’s family went to the SSBC office a few days after Angasi’s detention, and said that employees there told them that Angasi was in the custody of the National Security Service, South Sudan’s intelligence service, at its headquarters in Juba, known as the Blue House.

Authorities have not allowed Angasi to access his family or lawyer, and have not charged him with any crime, according to Dominic and Patrick Oyet, the president of the Union of Journalists of South Sudan, who also spoke to CPJ via messaging app. However, Oyet told CPJ that he and two other officials from the union were allowed to visit Angasi at the Blue House today.

Dominic told CPJ that Angasi was recovering from tuberculosis, and that his family was worried for his health. Oyet told CPJ that the journalist seemed physically well today.

“South Sudanese authorities’ detention of journalist Alfred Angasi for nearly three weeks, without charging him with any crime, sends a threatening message to media workers in the country and demonstrates a cruel disregard for the journalist’s health,” said CPJ’s sub-Saharan Africa representative, Muthoki Mumo. “Authorities must release Angasi immediately, and security personnel must stop retaliating against journalists for their work and editorial stances.”

Authorities previously arrested Angasi at the SSBC offices on July 3, held him overnight at the Blue House, and released him without charge the following day but directed him to report back on July 5, according to Dominic and news reports .

On July 4, Angasi told Dominic that his detention followed a disagreement at SSBC over his refusal to read a news item, she told CPJ, adding that Angasi did not specify the news item. Angasi told her that the disagreement took place a few days before his arrest in the afternoon of July 3, Dominic said.

However, Oyet and a Juba-based journalist told CPJ that Angasi had refused to read a news broadcast following SBCC’s airing of a presidential announcement on the evening of July 3. Oyet and the journalist, who spoke to Angasi on July 4 and asked CPJ not to name them for safety concerns, said authorities detained Angasi shortly after he refused to read that news broadcast. Today, officers at the Blue House told the union officials who visited Angasi that they were still investigating the journalist’s motive for refusing to read the news, according to Oyet.

In a statement , the journalists’ union said that such an issue should have been “an internal administrative” matter at the SSBC and demanded that authorities produce Angasi in court if he was suspected of a crime.

Oyet told CPJ that the Union of Journalists of South Sudan sent a lawyer to the Blue House on July 20, and while authorities did not allow the lawyer to meet with Angasi, they said the journalist would be released soon.

When CPJ called SSBC Managing Director James Magok Chilim for comment, he denied that Angasi was a journalist, and said he was a primary school teacher. Chilim refused to answer further questions from CPJ, and the call ended due to poor connectivity. When CPJ called back, a call via messaging app did not connect and phone calls were answered by an automated message indicating that the phone was switched off. Chilim did not respond to messages sent via messaging app.

Dominic told CPJ that Angasi has been a state media journalist for almost a decade, and multiple media reports about Angasi’s detention, as well as the journalist union’s statement, also identified him as a journalist. Chilim also spoke about Angasi’s case with the Independent broadcaster Radio Tamazuj , and said the journalist ought to have been freed on July 15, but that delays were probably because of unspecified investigations.

CPJ repeatedly called Information Minister Michael Makuei Lueth, who also responds on behalf of the National Security Service, and Elijah Alier Kuai, the managing director of the Media Authority statutory regulator, but the calls did not connect. CPJ also sent a message to the Facebook account of South Sudan’s president’s office, but did immediately receive any response.

In 2020, the National Security Service arrested journalists at least two journalists— Bullen Alexander Bala , a reporter with the private newspaper Juba Monitor, and Jackson Ochaya of the No. 1 Citizen newspaper—as CPJ documented at the time.