Going to waste: The children who survive on Gabon's garbage dumps 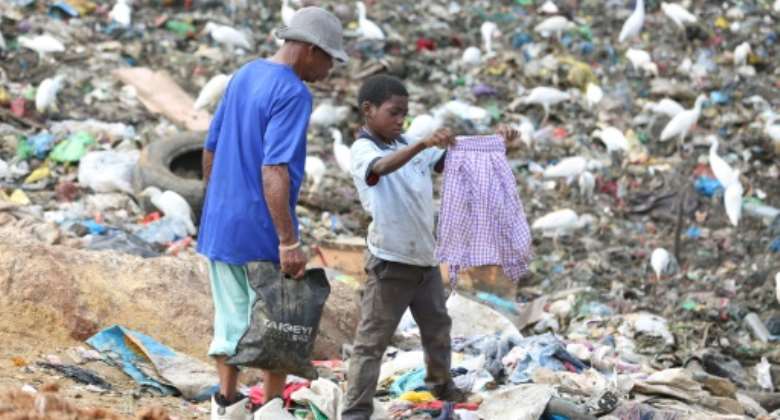 Dozens of children live and work around the Mindoube dump in Libreville. By Steeve Jordan (AFP)

Larry, a scrawny eight-year-old, struggles to haul along a sack that is bigger than he is, crammed with bits of metal that have caught his eye.

Dressed in ragged clothing and rubber boots, dozens of children like him live and scavenge on the Mindoube rubbish tip on the outskirts of Libreville, the capital of oil-rich Gabon.

Makeshift dwellings of sheet metal and recycled materials have been built on the landfill, a mountain several tens of metres (dozens of feet) high and hundreds of metres (yards) long.

Every day, dump trucks discharge about 800 tonnes of waste. Diggers churn the garbage in a constant hubbub of heavy machinery while a stink, fuelled by the sultry tropical heat, emerges from the debris.

In the middle of this, children wander in search of metals, especially copper, which they can sell for 2,000 CFA francs (around $3.5 / three euros) per kilo (2.2 pounds).

Acrid smoke pervades the neighbourhood when the scavengers burn electronic objects, such as televisions or computers, to strip out the copper elements inside.

"I work there 15 hours a day," says Larry, who has been coming to Mindoube for several months.

"I don't go to school any more. I don't have a choice," he said, his gaze fixed on the mounds of trash. "I earn a few thousand francs each day."

At that moment, a boy throws an empty paint can under the wheels of a dump truck, wanting to flatten it while the vehicle backs up.

The boy, in a T-shirt much too big for his frail body, is just a few centimetres (inches) from being crushed by its tyres.

Her NGO is campaigning to raise awareness for children who work on the waste tip, urging them to go to school and organising sports events.

"The state must ban child labour on the landfill," Ongo-Mbou said.

"You can find five-year-old children here, there are children who also die, crushed by the trucks, who get injured. It kills me to see children grubbing in the waste."

Gabon, a small central African country of two million souls, is one of the continent's largest oil producers, and one of the richest per capita in the region.

Yet according to the World Bank, a third of Gabon's people lived below the poverty line in 2017.

The situation has since worsened as the Covid-19 pandemic severely slowed the economy.

"We have seen more and more children coming to work at the landfill over the past year," said Roselin Bendome, who also works with Les Guerriers du Social.

"The state has to take care of them."

The scavengers are exposed to numerous health dangers, from skin rashes to respiratory diseases.

"I'm worried for my health but we have to do it," said Ekomi, 12, who has been coming to the dump for the past fortnight.

Apart from the health risks posed by the acrid air and intense heat, the young scavengers at Mindoube also die or are mutilated by falling under the vehicles which work at the dump, according to civil rights workers. By Steeve Jordan (AFP)

Daniel, 17, walks around shirtless, revealing a huge scar across his chest, which he said was caused by a metal bar.

He said he comes to "make a bit of money and help the family".

The tough teenager says he can earn some 15,000 CFA francs (around 23 euros) a day. He lives alone in a small hut made of wooden pallets, keeping his clothes in a discarded cooler.

"This is our livelihood, our daily life," says Crepin, a young man of 20 who has been scavenging on the waste tip for five years. He was hauling a bag of copper and wore a t-shirt on his head to protect himself from the sun.

Crepin and others like him see no other choice to survive than to work at the mountain of junk, in a country with an unemployment rate of 20 percent in 2020, according to the World Bank.