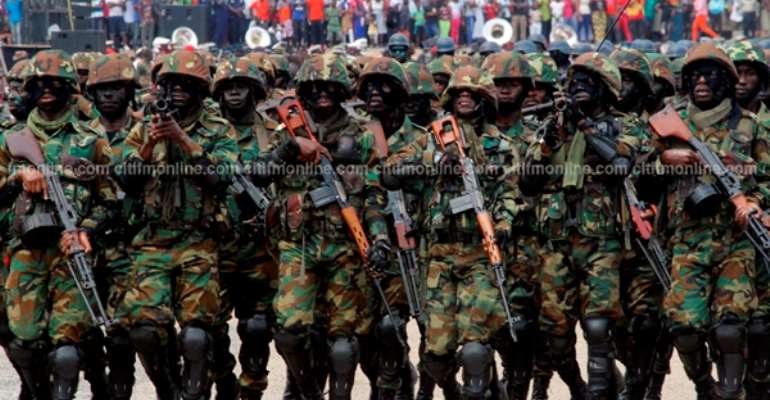 The principal duty of the military is to defend a nation’s territorial integrity against external aggressors.

To fully understand the role of the armed forces in contemporary society, one must understand the absolute priority the government and the military leadership have placed on the importance of internal security to the achievement of national stability. The Government, must believe that threats to internal stability often turnout the greatest threats to national security.

In this regard, certain exigencies that borders on security issues could necessitate the deployment of the military in internal security duties, as a result of, add in a way that enhances the efforts of the police.

Soldiers could also help by providing civil authorities the assistance, in efforts to curtail humanitarian disasters.

The imperatives of addressing such challenges had been daunting. It is not surprising therefore that Mr Oppong-Boanuh, the Inspector General of Police was apt in his presentation on the security situation when he appeared before the legislative committee. The discretion of self defense in every hostile and volatile situation rest solely on the security personnel.

To maintain the sovereignty of a country along with harmony, which involves all of its citizens, then, internal security is indispensably important.

Internal security deals with the various problems which usually give rise due to thoughts and ideologies. What many do not know is that, internal security is dynamic and must be viewed from each other's perspective.

Internal security (IS) is defined as “any military role that involves primarily the maintenance and restoration of law and order and essential services in the face of civil disturbances and disobedience, using minimum force".

Furthermore, it covers actions dealing with minor civil disorders with no political undertones, as well as riots characteristics of revolt and even the early stages of a rebellion.

Since the country's independence, IS threats have ranged from armed robbery, tribal differences, chieftaincy disputes, religious disputes and students agitations.

The present youth agitation must be of concern for all. Internal security is very vital for the enhancement of sovereign and territorial integrity of any state. In this vein, any military operation is usually guided by special rules for opening fire in both international and non-international armed conflict.

However, warring parties, including military operators have, at one time or the other, slightly observed and/or maximally disregarded these rules during volatile and hostilities activities. The attendant implications of such misnomer have always been extremely harmful in nature. Notwithstanding, the use of lethal force become necessary if the safety of the security forces are at risk.

In dealing with unarmed demonstrators, one will not go for live munition, but, when you have someone in the crowd holding a weapon which is capable of being used to kill or injure, the law permits the use of lethal force to get rid of the threat.

Against this backdrop, one should examine the military's duties in concert with internal security and special rules for opening fire in volatile situations.

In dealing with internal security, or IS, it must be understood that, the act of keeping peace within the borders of a sovereign state or other self-governing territories normally falls under the purview of the police.

Therefore the deployment of the military is generally to uphold the national law and defending it against internal security threats.

Though, the responsibility for internal security may range from police to paramilitary forces, and in exceptional circumstances, the military itself. Internal security deals with the state of law and order prevailing within a nation.

In summation, it could be said in a court of law, that a demonstrator holding a weapon (i.e a tool or something capable of injuring) was only thinking about it. He has planned it, but he hasn’t actually taken a step yet. Such commentaries are from ill-informed minds with shallow analytical mindsets.

I have said it somewhere before, that preemptive strike, is the only way to prevent attack, by disabling the hostile person and avert any sudden disaster to your life. In countries, without laws similar to the Internal Security Act, you can’t move early until there is some further act of preparation.

Be admonished and guided always by the rules of engagement and never let your guard down during any internal security duties. Soldiers aren't trained to dialogue but trained to act decisively.