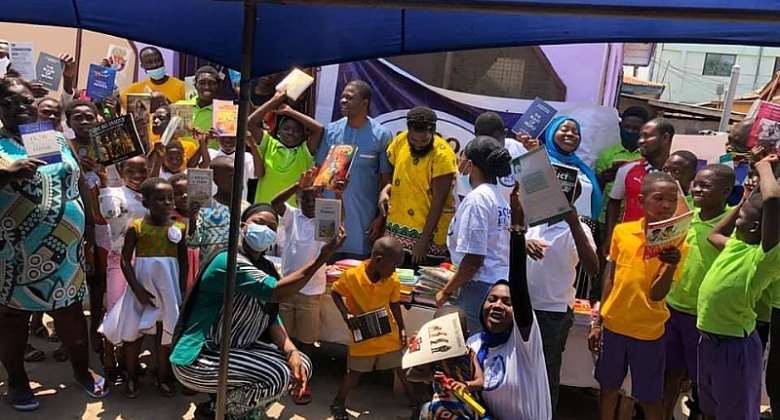 Six years ago, a group of young men and women came together one morning to form an organization. It was formed to bring the Vision of the founding father of the nation into reality. When Ghana attained its Republican status sixty-one years ago, Kwame Nkrumah delivered a very passionate speech about our direction as a nation and declared us a Republic.

In that particular declaration, he stated that “we must fight; relentlessly to uproot backward conceptions and negative phenomena in order to eliminate waste, extravagance, bureaucracy, laziness and similar manifestations harmful to our community. We must eliminate illiteracy completely from our midst”. This organization, upon several deliberations, was named Success Book Club.

These young men and women formed it as an organization to give the youth a platform to develop and make monumental impact in their lives, community, nation and world at large. What they mostly do is, jointly pick a book for the month, read, meet and discuss it. The lessons derived from the books are used to push the agenda of restructuring and re-engineering the community, and also rewiring the minds of our youth.

As a reading club, they are inspired by the words of George R.R. Martin, “a reader lives a thousand lives before he dies. The man who never reads lives only one.” And also, holding firmly to the words of our first president Dr. Kwame Nkrumah that “we must completely eradicate illiteracy from our midst”, they have taken it upon themselves to read one book every month, discuss and finally try to internalize the accumulated ideas for their own personal development. The vision is to see an enlightened and enhanced community.

The organization is formed in Nima. Nima is one of the most deprived, most marginalized and under-resourced communities in Ghana. Education, a key to development is nothing to write home about in the community and this has led to many of the youth in the community to grow up directionless because there has not been proper planning by authorities and the indigenes to develop the community.

The location of Nima is strategic as described by Mahmoud Jajah. In his well-written article, titled, If we are not careful, Nima and Maamobi will collapse, he wrote “notice that both Nima and Maamobi are strategically located in the nation’s heartbeat. These communities share the same constituency with the Seat of Government; the Flagstaff House in Kanda and two major TV stations…the state broadcaster; Ghana Broadcasting Corporation and TV3 Network. These two communities are also less than thirty minutes’ drive from the Kotoka International Airport, the Central Business District of Accra, the Parliament of Ghana, the Ministries in Accra, and other equally important landmarks. That is how strategic these communities are located.”

But the state of affairs in Nima is an eye-sore. There is still an ongoing discussion by political actors to upgrade the community but it has remained on paper rather than in blocks. Thus these young people formed the literary organization to help in ameliorating the ills in their communities and provide a platform for the enlightenment of the community. “An enlightened citizenry” they say “is definitely an empowered citizenry.” They believe through books, they can imbue a sense of civil consciousness in the youth and spark a gale of civil diligence for an overall meaningful life per the 2030 target in achieving the Sustainable Development Goals.

Through a strong spirit of consistency, diligence and a strong volunteering spirit, they have read about fifty books covering biographies, fictional stories, history, socio-religious books and several articles written by foreign and local authors. The first book they read was Think Big: Unleashing Your Potential for Excellence by Benjamin Carson; the man who has become a global ambassador for reading and its powerful life-changing effect. They are currently reading The Rules of People written by Richard Templar. One book that stood out in all their deliberations was The Autobiography of Malcolm X, one of the greatest books written and also the book that underscores the redemptive power of reading and literacy. They had a former Minister of Trade and Industry, Hon. Murtala Mohammed to lead the discussion during that particular month’s discussion.

The commitment of the members is great. The spirit of altruism, the fellow-feeling and the spirit of camaraderie and comradeship established is overwhelming.

This culminated in several outreaches in schools where their members volunteer to teach, inspire and uplift the souls of the young ones. And they have held lots of such sessions in various schools in the Ayawaso District.

The greatest impact and achievement can be found in the quality of youth this organization is producing. Through the books they read, many members have tried starting small businesses. Many have started being entrepreneurial and are working hard to push ahead their individual economies which has an effect on the economy of the community. In the early years of the organization, many of them were in Senior High School and a few in the University. Today many are graduates and have gained meaningful employment in different sectors of the economy. Five of their members have secured admissions in various universities in the United States of America and are pursuing higher education. There are about two also in Europe. This absolutely is a tour de force. A remarkable feat.

Though they have not been around for long, one could see the monumental changes in the thoughts, activism and personal life of members and the many that get influenced by their lives. There has been a measurable progression in the lives of their members. Muhammad Ali stated in his Soul of a Butterfly that “little Black boys and girls had no public role models. We didn’t have any heroes who looked like us. There was no one for us to identify with, and we didn’t know where we fit in.” Success Book Club is churning out great role models for the next generation in the community.

In a dark community, they have resolved to push through the advocacy. They have a firm belief that the more people learn, the more they will know and the more enlarged their lenses will the focus on the world. It is a very important step and great initiative.

One great Ghanaian author simplified it for us by stating that “this is not to imply that one is less a human being for being unlettered; neither is it to say that the unlettered have no wisdom. But there is such a wealth of knowledge that is denied the unlettered; so much hidden from them; so many doors closed to them.” Success Book Clubs resolves to open those doors.

Indeed, with books, we conquer.

NB: The writer is the Executive Secretary of Success Book Club.