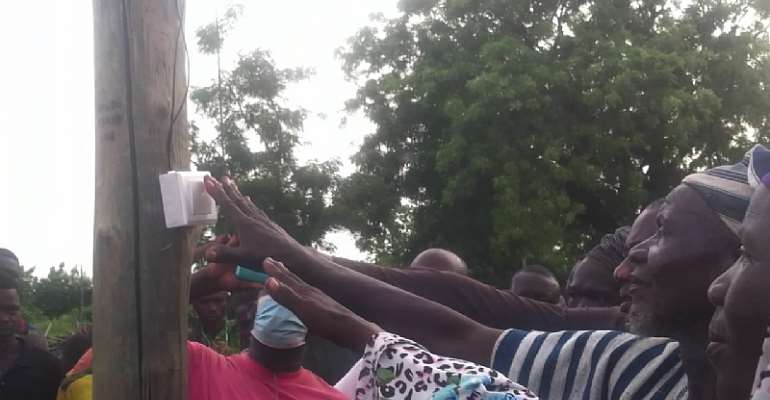 Government has extended electricity to seven communities in the North East District of the Savannah region on Saturday.

The electricity project executed by Wilkin Engineering Inc. forms part of government's efforts to connect rural communities across the country to the national grid.

The inhabitants of Janyili, Fushila, Kanjayili, Alindo, Jalu, Fushina among others who are predominantly farmers will now have access to electricity to undertake other business activities.

Speaking at the inauguration ceremony, Hon Muhazu bemoaned the extent of electricity connection in the region and gave assurances to work towards ensuring every community is connected to the national grid.

of the project to exercise restraint as they will be included subsequently.

For his part, the Member of Parliament for the area reiterated the NPP government's commitment to completing all stalled projects in the constituency.

Hon Iddi Abdallah also pledged to procure some grinding mills for the communities to end the long distance to Tamale to grind flour.

The Chief of Janyili expressed gratitude to the MP and government for the project.

But, he did not mince his words on a pressing land dispute in the area and appealed for an amicable end to it.

Hon Iddi Abdallah later toured the other communities to get them connected to the national grid.