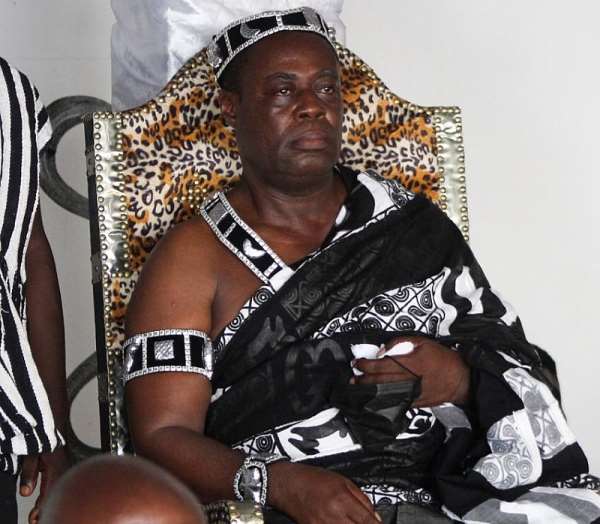 The elders and people of Teacher Mante, a fast-growing town situated along the Accra-Kumasi Highway near Nsawam, have enstooled a new chief, who has promised to spearhead the socio-economic development of the area.

Barima Okofo Gyekye Mante II who was enstooled on 10th May, 2021 was outdoored on the seventh day, 16th May, 2021 as custom demands in the palace in Teacher Mante.

The selection, installation and successful enstoolment of Barima Gyekye Mante as the Teacher Mantehene of the Akyem Abuakwa Traditional Council in the Ayensuano District of the Eastern Region put to end years without a substantive chief in the town.

Known in private life as William Yaw Gyekye Odame, the Teacher Mantehene, Barima Gyekye Mante II, is a royal of the Ahimso Clan of Aduana Abrade of Larteh Kubease in the Akuapem North District of the Eastern Region. He hails from the Titus Mante House of Ahimso, Larteh Kubease.

His great grandfather, Titus Mante, a teacher, catechist, presbyter and farmer, was the head man who founded Teacher Mante with the approval of the then chief of Apedwa (Apedwahene) of Akyem Abuakwa, which has since developed into a burgeoning town. Barima Gyekye Mante is a construction engineer by profession and holds a Masters Degree in Project Management.

He succeeded Barima Anim Mante I, the son of the late Baffour Gyebi Siaw Mante of Teacher Mante, who died on 16th September, 2018 (on his birthday) aged 70. He reigned for 12 years. Known in private life as Ebenezer Oscar Yaw Anim Mante, he was a teacher and journalist.

He was enstooled on 17th April, 2006. In 2013, Barima Anim Mante I was elevated from Odikro/Baffour to Barima status by the late Apedwahene Osabarima Obenakwa Kwarifa II. His elevation was a result of his exquisite leadership and vision for the development of Teacher Mante and the surrounding communities. This status gave him a more dignifying title in the hierarchy of chieftaincy in the Akan political system.

He had proved his vision by making the town more attractive to investors who were willing to invest to bring massive development to his people. Teacher Mante is a rapidly developing town located along the Nsawam-Suhum Road, five minutes drive from Nsawam and 30 minutes drive to the Accra Metropolitan Area.

With less traffic due to the operation of the Pokuase Interchange, Teacher Mante is a suitable destination for real estate, healthcare, educational institutions and other businesses. Other areas which are close to Teacher Mante are ideal for commercial agriculture (fish farming, cattle rearing, grasscutter rearing, poultry, piggery, etc.), and for industries due to easy access to raw materials like pineapple, oranges, pawpaw, cassava, timber, stone quarries, and utility services like water and electricity as well as transportation and communication.

Socio-culturally, Teacher Mante celebrates a festival called Asanka at the end of every year. The festival commemorates a feast of love and exchange of pleasantries while showing care by offering gifts to the needy to foster unity and instill kindness and generosity among the people.