By Caroline Taix and Christophe Koffi 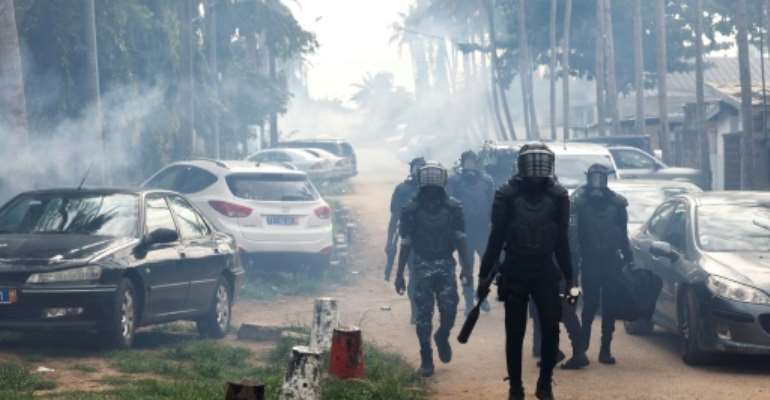 Laurent Gbagbo's homecoming is seen as a key test of stability in Ivory Coast, the world's biggest cocoa producer and the wealthiest country in francophone West Africa. By John Wessels (AFP)

Former president Laurent Gbagbo returned to a tense Ivory Coast on Thursday after nearly a decade, with police using tear gas to disperse supporters seeking to welcome him home following his acquittal by the International Criminal Court (ICC).

Gbagbo left the country in humiliation in 2011, after his refusal to accept electoral defeat sparked a conflict that ended in his arrest.

But after Gbagbo was cleared in The Hague of crimes against humanity, his once-bitter rival, the current president Alassane Ouattara, embraced his return in the name of reconciliation.

The homecoming of 76-year-old Gbagbo is seen as a key test of stability in Ivory Coast, the world's biggest cocoa producer and the wealthiest country in francophone West Africa.

Tensions heightened ahead of his arrival as police dispersed dozens of supporters trying to gather near Abidjan airport and witnesses reported scuffles.

Gbagbo flew in from Brussels, where he had been living since the ICC acquitted him in a dramatic decision in 2019. An appeal against the ruling failed in March, paving the way for his return.

He was ousted in April 2011 after around 3,000 people died in the months-long conflict that followed his refusal to accept electoral defeat at the hands of Ouattara.

Today, Gbagbo has been recast in the role of statesman, called upon to help national reconciliation after elections last year left scores dead.

Gbagbo's Ivorian Popular Front (FPI) party had held talks about the scale of celebrations with the government, which preferred a more discreet event.

Communications Minister Amadou Coulibaly said on Wednesday that "if there was any ban (on gatherings), it would have been made public".

But on Thursday, Coulibaly told AFP he had learned of Gbagbo's return itinerary "through the media".

He said that attempts by Gbagbo's supporters to reach the airport were "disturbances to public order" and that he had "not heard any call to go and welcome him".

"There is no abuse of law and order," he said.

The road to the airport was blocked to those without a plane ticket or other authorisation, and police used to tear gas to disperse angry Gbagbo supporters gathered along it.

A spokesman for Gbagbo told AFP there had been no instructions from the government to restrict gatherings. By SIA KAMBOU (AFP)

"We want to welcome Gbagbo," one woman shouted in frustration, while a man said he was "more determined than ever" to see the ex-president.

A Gbagbo spokesman said: "We are surprised by this unjustified reaction".

He added that "arrests have been carried out" and that buses of Gbagbo supporters coming in from the provinces had been blocked from entering Abidjan.

"This is out of step with the spirit" of cooperation between the government and FPI "which had prevailed until now," he said.

Ouattara agreed to let Gbagbo use the presidential salon at Abidjan airport to be welcomed by relatives and FPI leaders.

After leaving the airport, Gbagbo is scheduled to travel through the city to the Attoban neighbourhood, where his old campaign headquarters are located.

Hundreds of people had gathered at the headquarters on Thursday afternoon, AFP reporters said.

'Wants to play his part'

A profile of Laurent Gbagbo. By Camille CAMDESSUS (AFP/File)

Groups representing the victims of the 2010-2011 post-election violence have condemned the "impunity" he has received and said they would protest his return.

They also point to a 20-year jail sentence Gbagbo was given in absentia for "looting" the Central Bank of West African States during the conflict.

Authorities have already hinted that this sentence will be lifted.

Gbagbo was first elected in 2000, but his tenure was marked by division and rebellion in the former French colony nation once seen as a beacon of stability in West Africa.

Elections that should have been held in 2005 were postponed six times until 2010, when Gbagbo lost to Ouattara. Conflict erupted, leading to his arrest in April 2011 and transfer to the ICC in November that year.

His party insists he is returning in peace. In March, it took part in legislative elections, ending a decade-long boycott of the ballot box.

His attorney Habiba Toure, who was travelling with the ex-president, told AFP in Brussels that Gbagbo "is happy, enthusiastic and wants to play his part to try to reconcile Ivorians. He needs to talk to his people."