Victims' organisations weigh up strategies ahead of Gbagbo's return

By François Mazet with RFI 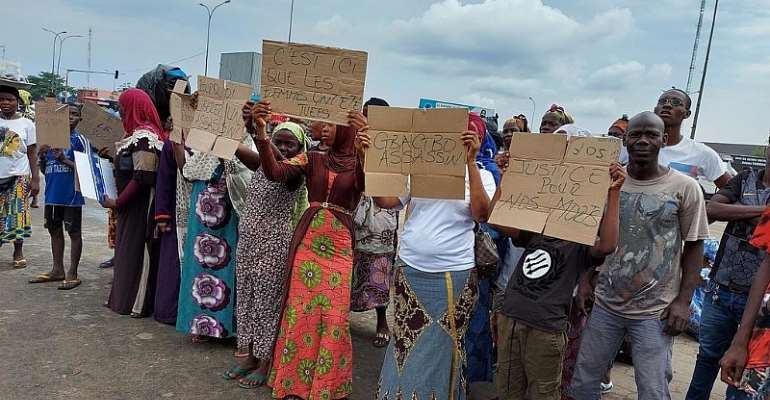 Ten years after his transfer to the International Criminal Court, former Ivorian president Laurent Gbagbo, acquitted of charges of crimes against humanity, is expected to return to Côte d'Ivoire on Thursday afternoon. Associations representing victims of political violence are divided as to what should happen when he arrives.

Some are still calling for justice, while others want priority to be given to reconciliation and forgiveness.

Earlier this week, a group of several dozen people gathered in front of Abobo City Hall, in a northern suburb of the capital Abidjan. They were part of a brief demonstration of local youth and women demanding justice, demanding that Laurent Gbagbo be sent to prison or house arrest. Among them was Issiaka Diaby, the president of the Collective of Victims in Côte d'Ivoire (CVCI).

“Laurent Gbagbo, for some victims' communities, is like a wolf that has been chased away from the sheepfold and is now coming back,” he said.

Mamadou Soromidjo Coulibaly does not share this stance. In the building opposite, he heads the National Federation of Victims of the Crisis in Côte d'Ivoire (Fémavipelci). He acknowledges the defeat of the judicial option and prefers to emphasize the need for reconciliation.

“What intrigues us a little is that people want both reconciliation and justice. In this country, we know that everyone is involved,” he said. “Either we go for reconciliation and we erase everything, or we go for justice and we all point to ourselves one by one. All we ask is that they ask for forgiveness for having wronged us. We can't fight all our lives.”

Coulibaly is especially concerned that political leaders "are not playing the game. Like other victims' organizations, Fémavipelci and CVCI shared their proposals on reconciliation last week with the minister in charge of the file, Bertin Konan Kouadio.

Aged 76,  Gbagbo is set to arrive aboard a commercial flight from Brussels, his home since the International Criminal Court (ICC) acquitted him in 2019. An appeal against the ruling failed in March, paving the way for his return.

Gbagbo and his right-hand man Charles Blé Goudé were found not guilty by the International Criminal Court of crimes against humanity in 2019 related to post-election violence in Côte d'Ivoire more than 10 years ago. Some 3,000 people were killed following disputed results in the 2010 polls.

At the time, Gbagbo refused to cede power to incumbent President Alassane Ouattara, but with the help of a French military intervention he was removed from the presidency. He was sent to the world court the next year.

Gbagbo's beginnings
Gbagbo is among a handful of powerful, ageing politicians whose careers were forged in early years of independence from France.

A historian and socialist from a humble background in a country whose politics is dominated by well-off families, he launched a campaign in the 1970s to end the country's single-party system.

He was jailed for almost two years and in the 1980s spent years in exile in France.

After he returned and a multiparty system was introduced, Gbagbo became the sole opposition candidate to Felix Houphouet-Boigny, Ivory Coast's revered founding father, in elections in 1990.

Gbagbo was elected president in 2000, but his tenure was marked by division and rebellion.

Elections that should have been held in 2005 were postponed again and again until 2010, when he lost to Ouattara, and conflict erupted.

Gbagbo has accused France of being behind the "plot" that led to his arrest on 11 April, 2011 by Ouattara's French-backed forces.