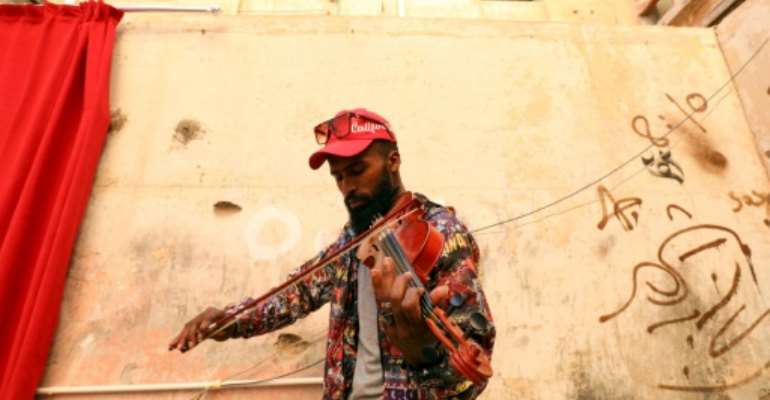 A Libyan musician plays during a cultural week in the eastern city of Benghazi on June 14, 2021. By Abdullah DOMA (AFP)

Libya's eastern city of Benghazi is hosting a rare "week of culture" featuring art, music and theatre, as the country attempts to turn the page on a decade of violence.

"It's an honour to have an exhibition for the first time in Benghazi," said Elham el-Ferjani, an artist who travelled from the capital Tripoli in the country's west specially for the event.

Benghazi was the first city to rise up against longtime dictator Moamer Kadhafi in 2011 in a NATO-backed revolt.

The situation deteriorated into a complex war involving Libyan armed groups, foreign mercenaries and foreign powers, and an ensuing political crisis saw the oil-rich country split in recent years between rival authorities in the east and west.

An October truce set in motion a UN-sponsored process that led to the creation of an interim government tasked with preparing the country for elections this December and unifying its institutions.

Ferjani, whose work is inspired by Libyan desert rock art, Amazigh (Berber) culture and the North African country's decade of conflict, is displaying her paintings at the Barah cultural centre in the heart of Libya's ancient second city.

The opportunity to meet with artists who have travelled from all over the country was "a source of joy", said Ferjani, whose show kicked off the week's events.

Other activities include workshops on glass painting, photography and sculpture, as well as roundtables and conferences, said organiser Hazem el-Ferjani, who is not related to the artist.

The aim of the cultural week, which runs until Saturday, was "to revive the artistic and cultural life of Benghazi", a city long associated with violence, he said.

The programme also features debates on Libyan cinema, a concert of Arab-Andalusian music and a play performed by a Libyan theatre troop.