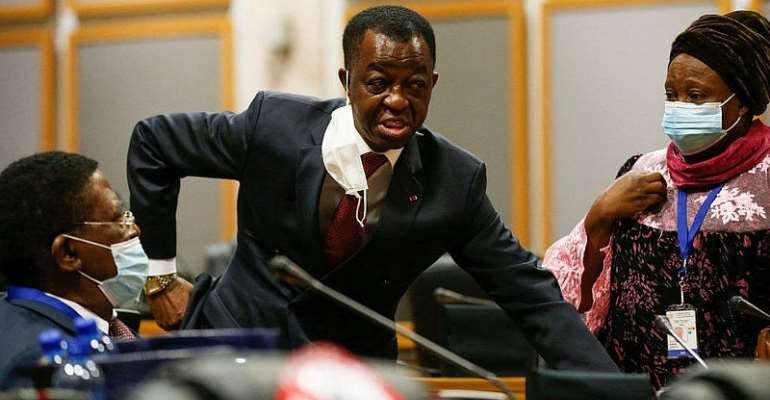 Founded with the noble ambition of uniting the continent, a session of the Pan-African Parliament (PAP) recently descended into farce with some angry members fighting and threatening to kill each other.

The ugly scenes came amid sharp divisions over who the next president of the 235-member parliament should be, with southern African delegates insisting that their candidate should be chosen to end the dominance of other regions.

“I will kill you,” said South African MP Julius Malema, pointing his finger at a rival MP in an outburst that was caught on camera.

He later defended his comments, saying he had been threatened.

During another sitting, there were chants of: “No rotation. No voting. No election. Simple!” while members jostled for ballot boxes.

As the chaos continued, some of the politicians exchanged blows, while someone could be heard shouting: “Please call the police, it is urgent.”

In a BBC interview, Zimbabwean MP Barbara Rwodzi said she was injured on her left arm – which had to be bandaged – during the “battle” that took place at the parliamentary session held on the edge of the Gallagher Estate convention complex in South Africa’s economic heartland of Gauteng.

To critics, it was an embarrassing spectacle.

“We are more divided as a continent than we ever have been – that’s the reality. We parade this false solidarity in the face of great injustice. We have ‘sit-tight presidents’ and ‘presidents for life’,” Professor Lesiba Teefu, a political analyst attached to the University of South Africa, was quoted by Africa News Agency as saying.

“We don’t criticise each other. We have been experimenting with liberation for almost 60 years now and we are no closer to unity.”

The formation of the parliament 17 years ago was part of a grand plan forged by some of Africa’s then-leaders, including Libya’s Muammar Gaddafi, to unite a continent made up of more than 50 states.

They envisaged that the African Union (AU) would spearhead the formation of a single government, with the parliament serving as its legislative arm.

But, when it is not a boxing ring, the parliament is – as the South African Institute for Security Studies think-tank puts it – nothing more than a “glorified talk shop”.

Senegalese MP Toussaint Manga told the BBC that a large part of the problem was the fact that only 11 of the AU’s 54 member-states had ratified a 2014 agreement – known as the Malabo protocol – to give the parliament legislative power. At least 28 countries are needed.

“If we really want to move this parliament forward, the countries need to ratify and grant the parliament full powers,” he said.

But for now, many MPs remain focused on who will secure the plum job of parliamentary president – which comes with many perks, including upmarket accommodation in South Africa – with the AU footing the bill.

The contest will resume at a session scheduled for October, after last month’s session was abruptly halted because of the fighting.

“The eastern, western and central regions have hijacked the leadership for three terms,” Namibian MP McHenry Venaani told the BBC.

Outnumbered in voting, the southern African bloc wants the post to be given to a Zimbabwean, Chief Fortune Charumbira, the current acting leader, in a deal that would see the presidency rotate between the different regions.

Rather than risk its candidate losing in a three-way contest with a candidate from Mali and South Sudan, some MPs from southern Africa disrupted proceedings, justifying their actions by pointing to the instability in the two states.

“Mali is a country that has had two coups and has been suspended by its own regional parliament and subsequently by the African Union.

“The other candidate is from South Sudan. It is well known that currently their parliament is not operational, one wonders where this candidate is coming from – he’s not even been sworn in by the parliament of his own country,” Ms Rwodzi said.

“Our candidate wants to rebuild PAP’s reputation, focus on financial transparency and also look after members’ affairs,” she added.

Critics, however, question whether Zimbabwe, where Zanu-PF has been in power since independence in 1980, is best-placed to champion democracy and accountability.

But the international editor of South Africa’s public broadcaster SABC said she sensed a yearning for change among younger members of the Pan-African Parliament.

“They want the leaders to implement the Malabo protocol and ensure that PAP’s [former] president is also held to account because there have been allegations of corruption,” Sophie Mokoena added.