Thoughts Of A Nima Boy: Muhammad Ali’s Soul Of A Butterfly; Insights From Sabena 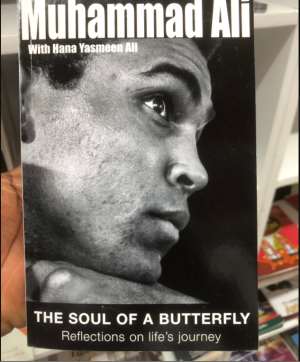 I went into a writing hibernation after several weeks of giving readers insights and thoughts on books, literary programmes, youth-activism and community projects. I had to lie fallow for some time to see to one or two personal projects that are monumental to my life. Sometime in the near future (God-willing), I will tell readers how these literary write-ups have helped me secure what might stand out to be the singularly most significant achievement in my life. As humble as this platform might seem, it has helped personified the statement Neil Armstrong made when he first stepped on the moon “one small step for a man, one giant leap for mankind.” This platform secured for me a quantum jump. So I had to pause to see to that. After all our elders say it is not a crime for the flute player to sometimes stop to wipe his nose. But I have wiped my nose enough. I have to come back. If for nothing at all, at least for two people.

The janitor at my workplace tells me he reads my column every Thursday morning before he carries on his task for the day. Few days ago, he mentioned that it’s been a while he read from me. His lamentations pale in that of the man in my neighborhood who has become a hype man of sort. He tells everyone around that this son of ours writes in the prestigious Business and Financial Times. He encourages me to keep writing. Few days ago he complained that I do not bring him my column for him to read anymore. The way and manner he complained was interesting. For a while I thought he was performing Bob Marley’s Weeping and Wailing. So I decided to resume. And just when I was thinking and tossing things in my mind as to what to write, a friend I made on this literary journey brought me gold. She brought a book we all read and spoke about in sharp focus. She read the book that stirs the soul and inflames the passion and went ahead to write some interesting stuff about it, which I want to share. Before I continue, it is fair enough to introduce the book, and my friend to you.

The book is The Soul of a Butterfly; Reflections on life’s journey. Two hundred and fifty-six pages, it was a collaboration between Muhammad Ali, the three time Heavyweight Champion (considered by many as the greatest of all time) and his daughter, Hana Ali. The book chronicles some of the most important experiences in the Champion’s life and offers you the opportunity to see how he became who he became. A review once described it as “an elliptical, collage-like memoir that offered a philosophical look back at his life.”

Published in 2003, the book is filled with so much inspiration for those who feel downtrodden to work themselves through the muck and mire of difficulties their situation presents. The book shows you where and how he started, the people who rejected him and how he was able to rise to the top. It is a book that offers hope too to those who feel posterity’s door is shut to them. It is a book that focuses on the power of his unshakeable faith and strength of his wondrous belief in the Lord of the universe. Faith they say is the substance of things hoped for and the evidence of things not seen.” Muhammad Ali at this point in his life was battling an enemy outside the boxing ring. He was battling Parkinson’s disease. Yet he gave us an account that further emboldens spirituality in all of us. He stated that “ We all have the same God, we just serve him differently, Rivers, lakes, ponds, streams, oceans, all have different names, but they contain water. So do religions have different names and they all contain truth, expressed in different ways, forms, and times.”

So Sabena read the book and decided to give us this account. Sabena is an enterprising young lady I met the day she launched her book that touches on a very important yet neglected topic in the country; Adolescent Reproductive Health and its concomitant youth issues. She writes:

After watching the movie One night in Miami, I knew I wanted to learn more about Muhammad Ali and Malcolm X. All the while watching, I thought of an acquaintance, Maazi Okoro, I don’t know if I can call him a friend. He sent me a text asking about the movie and we went on to talk about Malcolm and Muhammad and he further stirred my curiosity and I quickly placed an order to get this book on his recommendation. I think he is slowly understanding my kind of books. Woo-woo #smiles. Sitting by the road side at Hajia Sadia’s eatery at Accra Newtown, I burst out into laughter after reading a few lines from the book. Muhammad Ali’s humor had caught up with me. Need I mention how difficult it is to crack me up? I think that I have met my woo-woo mate. I thought.

I would highlight a few issues that I loved and have questions about.

I love that Muhammad Ali mentioned something I also think about, that “spirituality is recognizing the divine light that is within us all. It doesn’t belong to any particular religion, it belongs to everyone.” In Islam, we believe we all have a natural disposition towards God. This I see in every human being. Where you say “God please” in your state of dire need. And that being, He hears you and is always at your beck and call. Muhammad Ali said in one of the chapters that, since it would cost you nothing to believe in God, why don’t you? It will give you everything to believe in God.” I believe faith brings us together if it is done with an open mind and heart.

I also loved the point that his father let his mother raise them though she was Baptist and he was Methodist. “A woman is better than a man, so you should follow your mother”. Educate a woman and you have educated a nation. The very role that Allah has given to women. Every woman should equip herself with the skills to nurture her children with love and wisdom. The men are not sidelined though.

One interesting insight from the book also is that our souls are inclined to goodness but the heart is inclined to evil. That our soul will wither away if we hold resentment and grudges in our hearts. For your soul to feel alive and in tune with God, let go of the negativity. He thus concluded that “A heart enlightened by love is more precious than all of the diamonds and gold in the world.”

On finding our purpose in life.

A question I’m constantly asking myself. Watching videos and reading books, but Muhammad Ali gave me much clarity when he said, “each time I thought I had achieved my life’s purpose, I discovered it was only another step in my journey.” This taught me that, there are phases in our lives that need us to be a certain person but those phases are linked to the ultimate purpose. He concluded by saying “I’m still discovering Gods purpose for me.”

So my question then is, do we choose our purpose or it’s chosen for us by God? I have my answer, but I leave you to ponder.

The Quran tells us to be reflective and pay attention to ourselves. Prophet Mohammad has urged us to be self-reflective. Oprah Winfrey, Eckart Tolle, Rumi also talked about awareness. When you are self-aware, you get to observe how you feel. How healthy your soul and heart is and how you can get back to the state that brings your soul alive. When Ali was diagnosed with Parkinson’s disease, it was difficult but his faith kept him going. Belief in Qadr (predestination) and knowing that focusing his awareness living each day with gratitude made the journey a lot lighter. Let’s do an exercise, close your eyes, be still, and observe how you breathe. Do this for 5 minutes. How do you feel?

I liked how he cherished friendships and didn’t have a problem apologizing. His apology to Malcom X and Joe touched me so much. How often do we apologize? To accept that negativity can come from us as well and that, we will be damned to lose some people in our lives.

As Muslim, I understand so well that happiness, true happiness comes from being at peace with yourself by maintaining a good relationship with God. When Ali was supposed to go to Vietnam, he said, “If I didn’t follow my true beliefs, I would never be free again. Free from materialism and other pleasures.”

That people act a certain way for different reasons and that our response to people and our experiences bring us a step closer to a realization. To what we are supposed to experience. To why it happens to us. And that instead of whining, take the lesson and as we say, “Meuve”

While reading, I wished that I had met him. And then he mentions that he wishes he met us too. But his message is “champions have to have a skill and a will. But the will must be stronger than the skill” I believe that when the will is stronger, you beat the odds to achieve your aim, your purpose.

We need to create memories with those we love. Put your phone and gadgets away, connect on a deeper level. I learnt from the show Solo that, Memories are vows to the ones you love. Bob Marley tells us that the good times of today are the sad thoughts of tomorrow.

You will be thankful for them one day. You may not have Parkinson’s but a time to come, you would find memories a good companion.

The soul of a butterfly has been a great read and has further made me a soulful person. I see myself a bee, so maybe in my case, a ‘soulful bee’.

NB: Inusah is a Youth-Activist and Executive Secretary of Success Book Club.

Sabena Abdul Raheem is the author of Growing Up Muslimah and the Director of Modest Code.