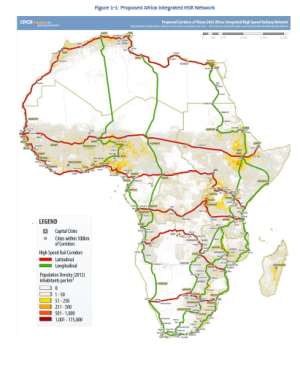 Watch the video below, an comprehensive discussion with Rowland Ataguba, Managing Director of Bethlehem Rail Infrastructure on the African Integrated High Speed Railway Network (AIHSRN). He is a driving force to have AIHSRN up and running in Africa by 2033. For Africa to realize the potential of the newly inaugurated, Africa Continental Free Trade Area AfCFTA, there must be an integrated rail network connecting the major capitals, cities, ports, and regions of Africa. Such an integrated network of freight and passenger transportation is necessary to reverse the dismal amount of trade among African nations, estimated at 15%. With the population of the African continent projected to have almost 2.5 billion people by 2050, the AIHSRN proposal is essential and cannot wait until 2063 as planned by the African Union (AU).

The African Integrated High Speed Railway Network will deliver connectivity across the huge continent via 6 main East-West and 3 North-South corridors, using standard gauge tracks with electric locomotives running at a speed of 160 kilometers per hour. These rail lines will become corridors of economic expansion for manufacturing and agriculture.

As the history of the development of great nations, such as the United States, Russia, and China demonstrate; railroads build nations, traverse continents, link oceans, and create a spine for manufacturing centers. Properly understood, infrastructure is much more than a simple collection of projects. Economic progress is determined by the relative level of the scientific-technological design embodied in the integrated infrastructure platform which undergirds the manufacturing and agricultural sectors of an economy. An individual infrastructure project, such as a railroad, may not yield an immediate profit itself. However, as physical economists like myself know, viable infrastructure projects contribute to increasing the productivity of the labor force, thus enabling the economy as a whole to generate a profit. Massive investments in infrastructure, such as AIHSRN, are essential to industrialize Arica, which is necessary to eliminate hunger and poverty across the continent.

Mr. Ataguba proposes that the entire network be completed in the next 12-13 years. The only way that AIHSRN can be FAST TRACKED is through centralizing the project. He says that too much valuable time has been lost in connecting the railway network, which is indispensable for improving the standard of living of the average African. He emphasizes that this rail network needs to affect the economy today, not tomorrow! Mr. Ataguba understands that for African nations to develop, this quality of infrastructure is urgently required.

AIHSRN will revolutionize African economies in providing standardized, fast, efficient, and safe transport at a far cheaper cost than road.

Once completed, freight and passenger transport across Africa will be transformed. For the first time in history, it will be possible to travel and send freight on a modern railway from: Dakar in Senegal to Djibouti or Pointe Noire; Congo Brazzaville to Dar Es Salaam; Tanzania to Walvis Bay; Namibia to Maputo Mozambique. Traversing the continent from east to west. Likewise, it will be possible to travel the entire length of the African land mass from Cape Town, South Africa along the Indian Ocean to Alexandria in Egypt or from Cape Town to Tripoli in Libya along the Atlantic coast.

For those passionately concerned about securing a prosperous future for Africa; watch this video.