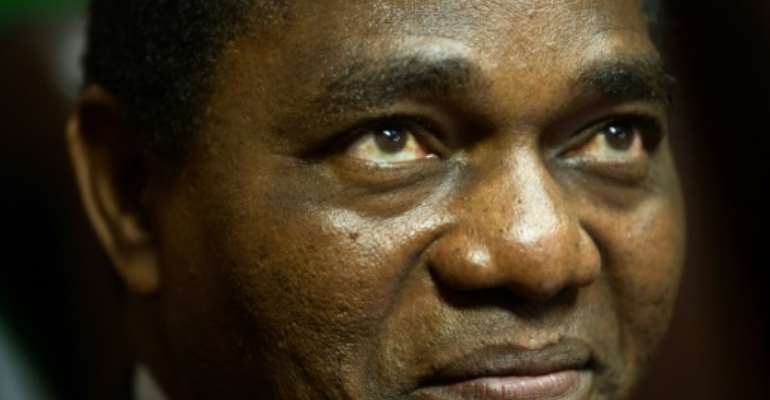 Zambia's main opposition leader said the country's current rulers cannot save the nation from a punishing debt crisis, just months before the nation heads to the polls.

The nation of 17 million people holds presidential and legislative elections in August. It is saddled with a foreign debt of nearly $12 billion (10 billion euros).

In October, Zambia missed a deadline to honour an interest payment of $42.5 million due on a Euro bond.

Three months later, on January 30, it skipped a $56.1-million interest payment on another bond.

"The debt has really grown to unsustainable levels, which is choking down domestic revenue," Hakainde Hichilema told AFP in an online interview.

The 58-year-old politician and businessman blamed the Patriotic Front government and corrupt officials for the situation.

"They created the debt crisis" and "they don't know how to come out" of it, he said.

"They are off-the rails on a lot of things. The levels of corruption are unprecedented".

Zambia over the past decade has seen its total debt -- including domestic debt -- bulge to around $20 billion, he said.

Zambia requested funding from the International Monetary Fund for reforms and for debt repayment, but three weeks of talks ended inconclusively in March with the IMF saying "key challenges remain".

The government has also applied for loan restructuring under a new G20 debt suspension initiative.

Repaying the debt has grown harder as the country's kwacha currency fell by around a third of its value against the dollar since last year.

Copper prices have however picked up this year and are at a decade high, which could help Zambia deal with its debt.

The debt crisis, poverty and a troubled economy are expected to dominate an election in which Hichilema is challenging 64-year old incumbent Edgar Lungu.

Leading the United Party for National Development (UPND), he said the stakes were "extremely high" as "Zambians want change".

Hichilema, who is making his sixth bid for the top job and who narrowly lost the election in 2016, called for "free and fair" polls, alleging "rule of law problems" and irregularities in voter registration.

"There are habitual arrests, we have extrajudicial killings, we have basically violence, community violence all over," he said, referring to the December police shooting of two people outside a Lusaka court where he appeared for questioning over a property purchase he made 20 years ago.

"These are serious issues, and we also have issues around ...freedoms -- freedom of assembly and associated movement which are restricted," Hichilema said.

Shortly after the 2016 vote, he was arrested and spent four months in jail for allegedly failing to give way to the presidential motorcade.

On foreign issues, Hichilema said the southern African regional bloc SADC should have acted early to clamp down on the Islamist insurgency ravaging northern Mozambique.

"SADC must do better and be proactive rather than be reactive," he said, adding "conditions were clear, indications were clear that trouble was coming in Mozambique. That extremism was growing".

"It was fantastic experience to serve under President Nana-A...
2 hours ago

Awutu Senya East: One injured as NPP supporters of outgoing ...
3 hours ago